The finance ministry just released its government sector finances framework for 2021−2023. The plan covers the entire consolidated budget (federal, regional and municipal budgets, plus the budgets for the state’s three social funds). At the end of September, the cabinet submitted to the Duma its suggestions for the federal budget and social fund budgets.

The framework sees nominal government sector revenues contracting by more than 7 % this year. The revenue drop would have been even larger (about 10 %) without the CBR’s one-time payment from the sale of its majority stake in Sberbank to the government. Tax revenues from oil & gas tax revenues are expected to fall by a third, while, thanks to the Sberbank infusion, other revenue streams should remain largely unchanged. Spending is expected to rise by more than 10 %, even with growth expected to ebb in the final months of this year. On the other hand, the government has prepared for a possible greater rise in spending. In a rare move, a large sum from the state coffers is marked for a possible shift to a separate government fund that would allow the government to target expenditures quickly, especially when it involves supporting parts of the economy or fighting the coronavirus. The government sector surplus in 2019, which corresponded to nearly 2 % of GDP, has turned this year to deficit, which is foreseen to reach about 4.5 % of GDP if the government refrains from the special dipping into its separate fund.

The Russian economy is forecast to recover next year to 3.3 % growth, and that pace is expected to remain almost the same in following years. The export price of Urals crude is assumed to rise from this year and remain at a level of around $45−47 a barrel. Oil & gas production and exports are also expected to increase. As a result, revenues from oil & gas taxes would rise by more than 15 % per year during 2021−2022. Other budget revenues are anticipated to increase at about 7 % a year. VAT revenues, the government sector’s biggest revenue stream (nearly a fifth of total revenues) should continue to rise at a brisk pace reminding of previous years.

The government hopes to bring down growth in nominal public sector expenditures during 2021−2022 to a couple of per cent a year, i.e. below the forecast inflation rate of slightly less than 4 %. With increased revenues and spending in check, the deficit should fall to 3 % of GDP in 2021 and below 1.5 % of GDP in 2022. Government sector wage increases will be frozen next year, and increases will only keep pace with inflation in the following two years. Under a decision from 2018, pensioners who do not work will receive an increase in their pensions of about 6 % a year. For the functional sectors, the target for next year is to lower the growth in spending in the healthcare and social support categories to very low paces. After rising last year and this year, defence spending is set to decline. Spending on the various branches of the economy, as well as domestic security and law enforcement, is to increase by around 5 % next year. The education category, which was in the shadow of other sectors this year, will also get a 5 % rise next year.

This year’s expanding deficit will be financed almost entirely by issuing domestic debt. Starting next year, the government plans to take on even more debt than the deficit, mainly because oil & gas tax revenues will accordance with the fiscal rule anew begin to flow aside for further transfer to the National Welfare Fund (NWF). Government debt will continue to rise, but the ratio of government debt to GDP is expected to rise no higher than to about 21.5 % by the end of 2023. The ratio of NWF total assets to GDP is expected to remain rather steady during 2021−2023 at about 10−11 %. NWF liquid assets are scheduled to stay at about 7 % of GDP. 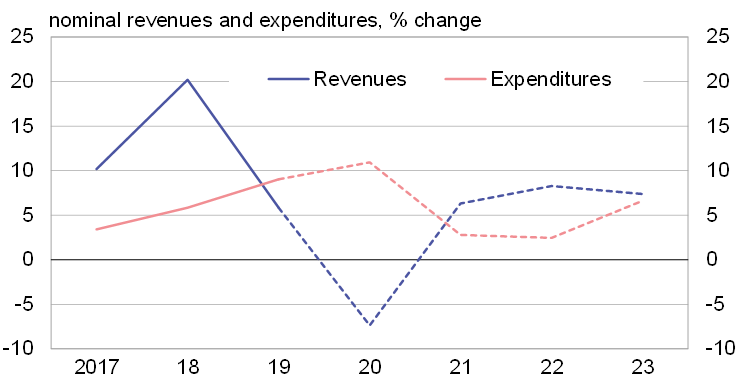