The international credit rating agency Fitch reports that nine Chinese companies as of end-July had defaulted on their foreign currency bonds (total $4.5 billion), topping the amount of the six companies that defaulted on roughly $3.3 billion in all of last year. More payment defaults are likely as $54 billion in bond repayments come due by the end of this year.

Even with an impending lockdown due to the coronavirus, Chinese companies issued over $20 billion in new US dollar bonds in January and February, over double the amount issued in January-February 2019. As the pandemic chewed through markets, however, Chinese international bond issues diminished. As of July, only $37 billion new dollar-denominated corporate bonds had been issued for the year compared to $59 billion issued a year ago. The total stock of dollar-denominated bonds issued by Chinese companies is currently around $257 billion. Chinese companies have only issued a small number of bonds internationally in currencies other than the dollar.

China's domestic bond market, which is dominated by yuan-denominated corporate bonds, is valued at over 28 trillion yuan ($4.1 trillion), or about 16 times higher than amount of dollar bonds issued by Chinese companies. On the domestic market, bonds issue activity is up significantly from last year. Issues have been accelerated by monetary stimulus policies such as rate cuts in the spring as well as relaxion of rules on bond issuing. Interest rates on debt securities have been lower than bank loan interest rates, making them an attractive way for businesses to raise money. Tighter regulation in the shadow banking sector has also motivated companies to move out of trust loans to bonds. Over 90 % of new issues came from state-owned enterprises (SOEs) and local government financing vehicles (LGFVs).

Fitch reports that 18 private companies and a SOE had experienced payment problems on the domestic market this year as of end-July. Troubles in holding to set bond repayment schedules applied to bonds totalling approximately 60 billion yuan ($8.7 billion). Over the course of last year, more than 50 companies had payment problems amounting to over 120 billion yuan. Given the size of the Chinese bond market, the proportion of defaults is still negligible. However, reported defaults do not give a realistic picture of the Chinese corporate liquidity. Companies may have agreed on extending payments directly with investors or exchanged maturing bonds for new ones. Even enfeebled companies have managed to pay off maturing bonds with new credit. Fitch observed that some companies have managed to issue bonds on the domestic market to pay off their maturing dollar bonds. Nevertheless, payment defaults are expected to increase towards the end of the year on the domestic market. Bloomberg reports that bonds worth 3.65 trillion yuan – more than double the amount maturing in the first half of this year –will come due by the end of December. Of that amount, over 360 billion yuan is owed by private companies with low credit scores.

Chinese firms have $54 billion in dollar-denominated bond debt coming due by the end of this year (situation as of Sept. 1, 2020) 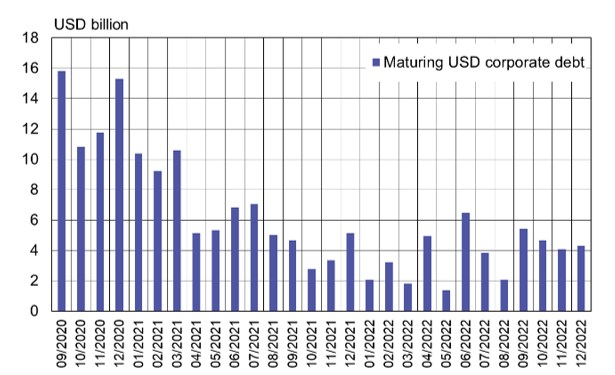 Sources: Bloomberg and Bank of Finland.