A new member survey from the US-China Business Council (USCBC) reveals that firms consider US-China tensions and fallout from the coronavirus pandemic the biggest challenges affecting their abilities to operate in China. The survey, conducted in May and June, is based on the responses of more than 100 USCBC member companies doing business in China.

Some 86 % of companies reported that the increased tensions between China and the United States had affected their business in China. They said that frayed diplomacy had created uncertainty in their business relationships, which has made business more difficult with Chinese parties. The tariffs and counter-tariffs imposed by China and the US have also hampered business. Phase 1 of the new US-China trade agreement, on the other hand, was seen to have had a stabilising impact on superpower relations and was viewed very positively.

The survey shows that most companies considered their prospects good in China’s current business environment. More than 80 % of companies said China was an important part of their global strategy, and 90 % reported that their Chinese businesses were profitable. A clear majority said that their business, fixed investment plans and wages would remain unchanged or increase this year. However, heightened geopolitical tensions and the coronavirus pandemic have increased uncertainty about the near future. Fewer respondents said they had plans to expand their businesses or raise wages, and only 30 % of companies predicted revenue growth in 2020. Despite this, the interest of companies in moving operation out of China has not increased since last year. Only 4 % of companies said they had considered or were planning to move their operations back to the US, and 11 % said that they were moving operations elsewhere.

Many US companies pointed to the challenges of competing with Chinese companies, especially SOEs. The majority of companies responding to the survey expressed awareness or suspicions that Chinese SOEs receive favoured treatment from the Chinese state with respect to e.g. financing, licencing and public procurements. The respondents noted an improvement in China’s industrial policy and a greater willingness to enforce intellectual property right protections. China’s cybersecurity concerns were raised by the effects of superpower relations and restrictions on international data flows. Some 13 % of respondents said they had been asked to transfer technology, an increase of 8 percentage points from 2019. 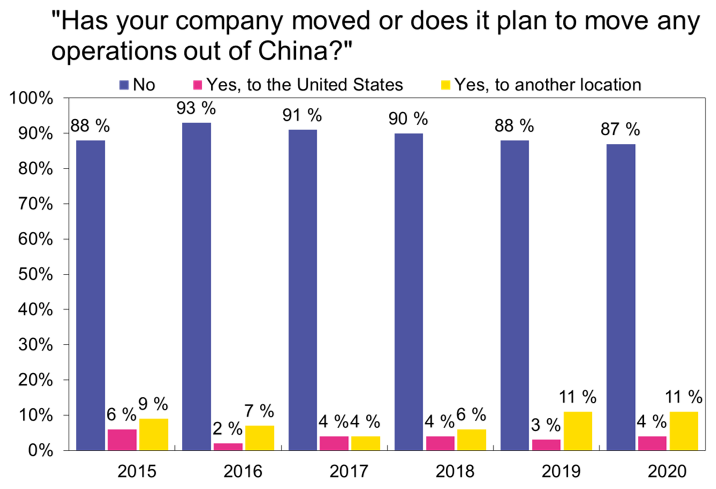