The balance-of-payments figures show net positive inflows of foreign direct investment into China in both the first and second quarters. Despite a massive current account surplus and small FDI surplus, the change in China’s reserve assets in the second quarter was only slightly positive (19 billion dollars). The figure implies that more capital flowed out of China either on record on the financial account or off the record under the “net errors and omissions” term. In any case, capital outflows from China are still much smaller than in 2015 and 2016. Detailed financial account figures will be released later along with revised current account figures.

The value of China’s foreign currency reserves, taking into account valuation changes, has increased by 75 billion dollars since the start of this year. As of end-July the value of China’s reserves stood at 3.3 trillion dollars (includes gold, SDRs and IMF reserves). While the People’s Bank of China has in recent years officially intervened only very little in the forex markets, state-backed entities such as China’s giant commercial banks can still influence exchange rates indirectly. The yuan’s exchange rate has appreciated by about 3 % against the US dollar since late May. At the same time, the yuan has lost about 3 % against the euro. On Friday (Aug. 21), one dollar bought 6.91 yuan and one euro 8.20 yuan. 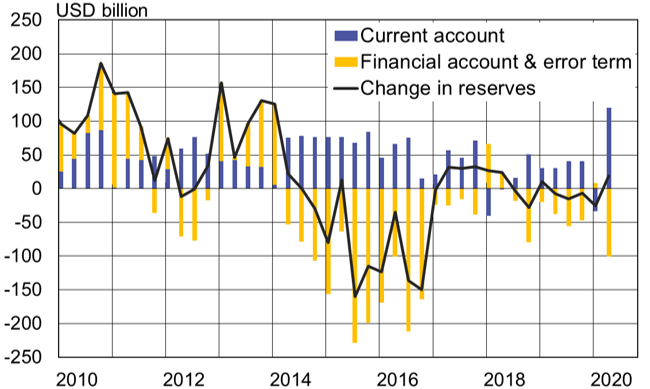