The value of Chinese goods exports measured in US dollars climbed by 7 % y-o-y in July. Exports recovered from the impacts of the coronavirus epidemic, thanks mainly to China’s successful suppression of the first wave of the virus and the fortunate positioning of Chinese firms to take advantage of global demand for medical supplies and personal protective equipment, as well as equipment related to remote working, especially electronic products. Overall, the export volume trend has lagged the export value trend in recent months. A significant exception, however, is petroleum products, where the value of exports has fallen due to a roughly one-third drop in oil prices from a year ago.

Chinese exports have increased in recent months, especially exports to the United States, ASEAN countries, the EU and Australia. Rail freight from China to Europe has also grown significantly. According to China State Railway, the country shipped 68 % more freight to Europe last month than it did in July 2019 – and the trains have gotten longer. The shift to rail freight reflects the impacts of coronavirus restrictions on air and sea freight.

Chinese exports face a number of uncertainties, not least of which is the duration and extent of the coronavirus pandemic, as well as its impacts on the global economy. In April, the WTO forecasted that global trade could contract this year by 13–24 %. At the end of July, the WTO revised its outlook to suggest a less severe economic contraction and improved odds for its most optimistic scenario.

The value of imports in July was 1 % less than a year earlier. The value of imports has fallen on the drop in global commodity prices, even as the import volumes of many commodities have risen substantially, particularly commodity inputs that bolster industrial output or reflect fixed investment stimulus. The volume of copper imports has risen by roughly 70 % y-o-y in recent months, and crude oil imports are up by about 25 %. The overall recovery in imports has been restrained, however, by weak domestic consumption due to the poor employment situation and low income growth.

Development of Chinese goods exports measured in US dollars 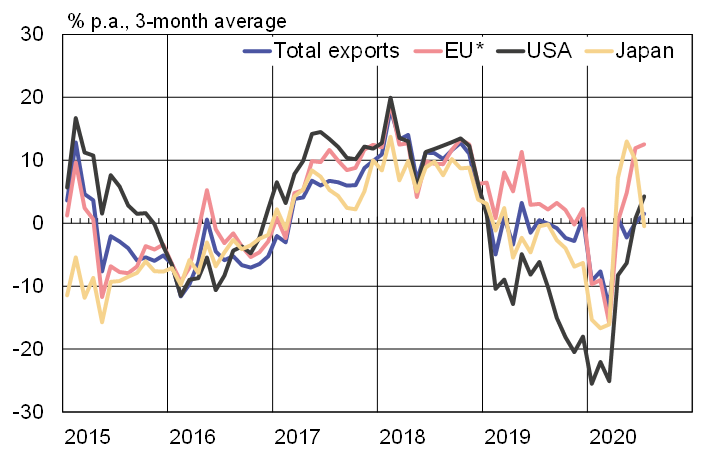