China Customs reports that the dollar-value of goods imports climbed by 3 % y-o-y in June, while goods exports returned to positive growth territory (up 0.5 % y-o-y). Foreign trade picked up considerably in the spring, reflecting overall stabilisation of China and the global economy in the wake of the coronavirus shock. In January-June, Chinese exports and imports were both down by about 6 % y-o-y.

China’s exports fell dramatically in the first quarter of this year, while second-quarter exports matched the level year ago. In contrast, imports shrank in the second quarter by 9 % y-o-y, largely on low global commodity prices. The price of crude oil has been rising, boosting the value of China’s imports somewhat in June. The volume of raw material imports in May was already higher than a year earlier. June import volumes were notably up for crude oil, iron ore and copper. Part of this growth reflects China’s emphasis on infrastructure-building in part of its stimulus efforts.

China’s foreign trade in June returned to growth with a number of countries. Even so, growth was spotty across regions. June export figures were about the same as a year ago, but there were significant changes in import numbers. China’s imports from Africa continued to decline (down 36 % y-o-y), while imports from Asia grew by 17 % for ASEAN countries, and 9 % for Japan and South Korea. China’s trade with Asia in January-June was about the same level as last year. In contrast, US-China trade has shrunk (China’s goods imports from the US were down by 4 % y-0-y and exports to the US down by 11 %).

Brexit-adjusted imports from the EU were up by about 1 % y-o-y in June. However, revised figures for the first half showed imports contracting by 10 % y-o-y. Chinese second-quarter exports to the EU were up 12 % y-o-y, with the result that exports over the January-June were about the same as year ago.

While China’s first-half foreign trade performance was better than expected, its third-quarter performance will depend largely on economic and coronavirus trends in China and globally.

Volumes of commodity imports increased sharply in May and June 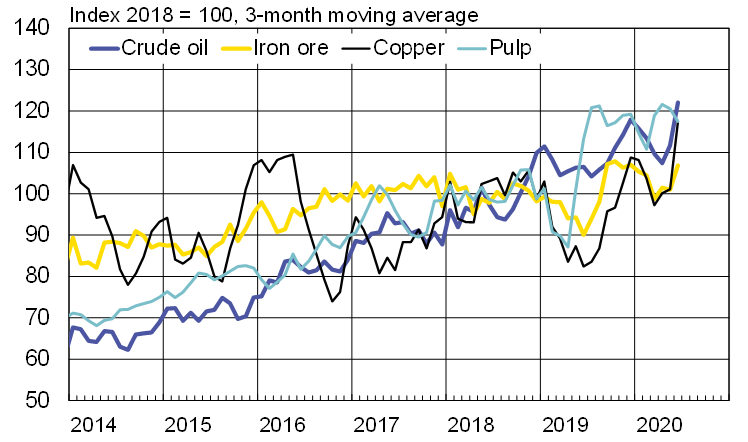