The People’s Bank of China says that domestic aggregate financing to the real economy (AFRE) rose by nearly 13 % y-o-y in June. The growth in financing has accelerated this year by two percentage points as China has poured on the stimulus to deal with the coronavirus crisis. Bank lending accounts for the bulk of credit (60 % of AFRE), followed by corporate and public sector bond issues (25 %) and financing from the shadow banking sector (10 %). The strongest growth in credit markets this year has come from bond issues. Financing provided by the shadow banking sector continues to dwindle, albeit at a slower pace than last year.

The Chinese economy contracted sharply in the immediate aftermath of the first wave of the coronavirus outbreak. The contraction of the economy together with the pick-up in growth of indebtedness due to stimulus policies, has sent the debt-to-GDP ratio skywards. The stock of total financing at the end of June was around 275 % of GDP. The debt ratio started this year at 254 % of GDP.

The covid-19 crisis has exacerbated China’s long-worrisome debt urges. Companies, in particular, have piled on debt and now their capacity to service debt is clearly diminished. A quarter of industrial firms, for example, posted losses in May and their total losses for this year have increased sharply. Officials’ efforts to help companies in distress include allowing small and medium-sized enterprises (SMEs) to postpone repayment of loan principal and interest until next year. Companies struggling with loan payments quickly show up on bank balance sheets. Even before the pandemic, the number of troubled small and medium-sized banks was rising. 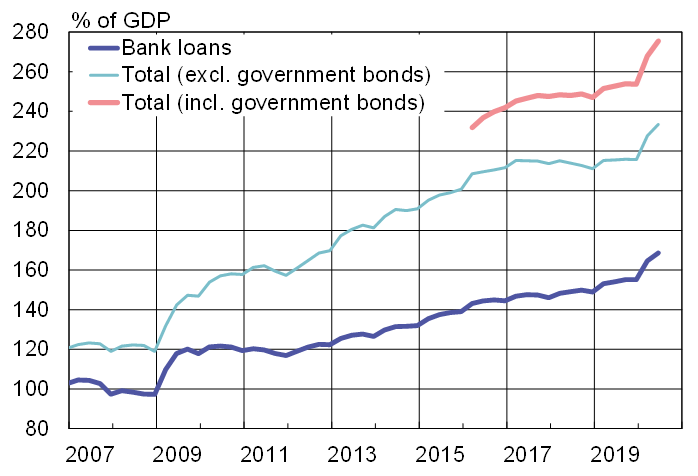 *) Official public debt estimate, about 40 % of GDP. Official statistics reports some private sector liabilities as government liabilities. The IMF’s broad estimate of public sector debt was around 70 % of GDP in 2019.