Preliminary balance-of-payments figures released by the Central Bank of Russia show that the country’s revenues from exports of goods and services fell by 35 % y-o-y in the second quarter. The on-year fall of revenues from goods exports deepened and was roughly a third, mainly due to a 50 % y-o-y drop in earnings on exports of crude oil, petroleum products and natural gas. Declines in other goods exports were considerably smaller, only about 7 % on average. Revenues from services exports were down to roughly 50 % y-o-y in the second quarter.

Russian spending on imports of goods and services in 2Q20 fell by about 25 % y-o-y, although preliminary data show that the June decline was slightly less than in the previous two months. The 2Q20 contraction in spending on imports of goods was no more than about 13 % y-o-y, and the June decline was just 6–7 %. Notably, the reduction in spending on goods imports so far has been much less than in the 2009 or 2015 recessions, which saw drops in imports of 30–40%. However, spending on services imports fell by 60 % y-o-y in the second quarter as Russian travel spending abroad essentially ceased (down 95 % y-o-y) due to travel restrictions from the coronavirus pandemic. Transport services also witnessed dramatic declines.

Preliminary balance-of-payments figures show that the net flow of private capital out of Russia has been slightly higher this year than in previous years, but was still well below the outflow seen during the oil price slumps of 2009 and 2014–2015. Foreign liabilities of banks continued to shrink. While the net outflow of capital from the corporate sector appears moderate, the corporate sector has shifted to moving clearly more money abroad as portfolio investment. Since last year, foreign investors have also been reducing their corporate portfolio investment exposure in Russia. 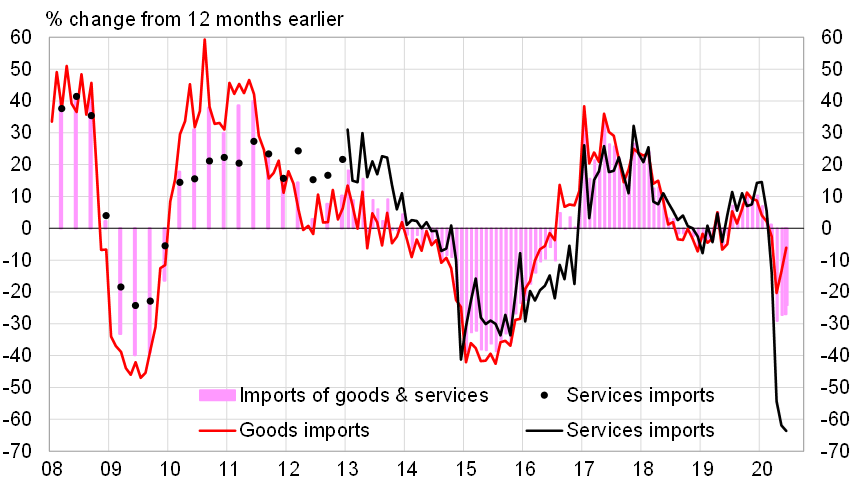