Despite a global recession, the IMF’s June World Economic Outlook Update still expects China’s economy to grow by 1 % this year. A resurgence of economic activity should bring growth up to over 8 % next year. Managing the COVID-19 crisis is expected to scar China’s economic growth relatively little. Indeed, the IMF expects that China’s GDP will be only less than 3 % smaller at the end of 2021 than it would have been according to its growth projection in last October's WEO forecast. The latest World Bank assessment of Global Economic Prospects offers a similar outlook for China.

The OECD’s June Economic Outlook sees China falling into recession this year. The OECD forecast presents two scenarios judged equally likely: one with no second COVID-19 wave and one in which a second outbreak that occurs towards the end of this year. China’s economy contracts by 3.7 % this year under the second-wave scenario, while it contracts by about a percentage point less under the no-new-wave scenario. Chinese economy in this latest outlook is expected to be 7–11 % smaller at the end of 2021 than the expectation published in the OECD’s previous November forecast.

Some investment banks and other forecasting institutions have raised China’s growth outlook in their latest updates on the assumption of a stronger-than-expected recovery in economic activity. Even so, forecasts are lower than few months ago. The June consensus forecast for China from FocusEconomics sees a 1.6 % increase in GDP this year. There is a huge disparity in the forecasts underlying the consensus, however. They range from -4 % to +4 % this year. The consensus forecast for next year is 7.5 %.

The growth outlook for the global economy has been revised downward sharply in all forecasts. The IMF expects the world economy to contract by 4.9 % this year and grow by 5.4 % next year. The IMF expects the COVID-19 pandemic a 7 % drop in global economic performance in 2020–2021 compared to the last October’s WEO. The IMF also sees the global volume of trade in goods and services contracting by 12 % this year. The OECD’s milder scenario anticipates that the world economy will shrink by 6 % this year and grow by 5.2 % next year. Under its second-wave scenario, the economy contracts by 7.6 % this year and grows by 2.8 % next year. Compared to its pre-corona forecast from November 2019, the OECD sees global economic output to be 7–12 % lower at the end of 2021. 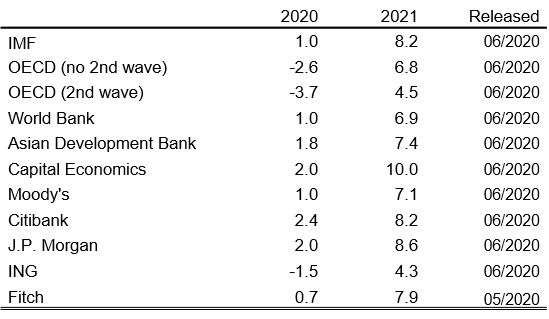