The National Bureau of Statistics reports that retail sales are slowly returning to normal levels, with retail volumes in May only down by about 4 % y-o-y. Restaurant sales, still off by about 20 % y‑o‑y, strongly reflect coronavirus restrictions and changes in consumer behaviour.

In contrast, industrial output, has recovered rapidly. May industrial output was up by 4 % y-o-y. Nevertheless, there was wide variation across sectors. Industries involved in production of personal protective equipment (PPE) saw strong growth. Production of industrial robots, microchips and computers has also increased by over 20 % y-o-y in recent months. Moreover, growth has been robust in many construction-related industries. For example, production of steel and cement have reached record levels. Production of earthmoving equipment such as excavators, as well as elevators has also grown rapidly. The resurgence of industrial output has also led to increased electricity consumption. Due to China’s heavy reliance on coal, air pollution has also returned to pre-corona levels.

Increased production of construction materials suggest a pick-up in building activity. Official figures point to a recovery in fixed investment after a near halt in February, but it is unclear whether fixed investment in May matched or remained below the May 2019 level. China’s data on fixed investment leaves much to be desired. The stock of aggregate financing to the real economy (AFRE) has picked up only slightly in recent months and was up by 12.5 % y-o-y in May. Last year, AFRE grew by just under 11 %.

Analytics firm Trivium China estimates that Chinese firms were operating near 90 % of normal levels at the beginning of June. Weekly and daily figures for June also suggest economic activity has continued recover. Power-plant coal consumption is at or above levels of a year ago. Night lighting at industrial parks is almost on par with 2019 levels. Restaurant orders continue to rise. Apartment sales are roughly at 2019 levels. A big difference in Chinese behaviour is that people still avoid using public transportation, preferring their own cars instead.

Beijing has registered over 250 new coronavirus cases in recent weeks, but the situation seems to be under control at the moment and economic consequences for the country will likely be relatively minor despite school closures, flight cancellations and stricter quarantine rules.

While industrial output has bounced back to positive growth, retail sales continue to lag 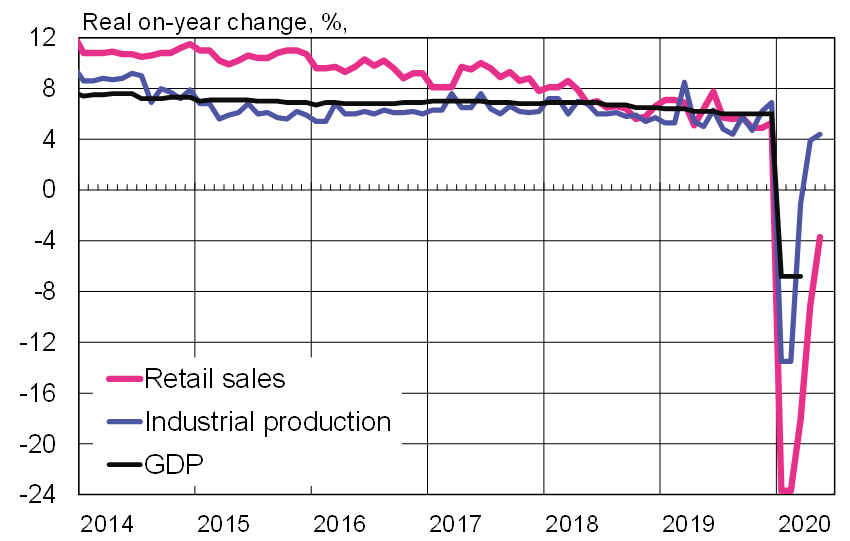