The price of a barrel of Urals-grade crude oil has risen over the past month from just over $30 to around $40. The price has now recovered to levels similar to early March, but still is about 40 % below the price at the start of the year. The Urals price has quite exceptionally exceeded the price of North Sea Brent grade in June.

Global crude oil prices have recovered from record lows with the new OPEC+ production ceiling agreement (BOFIT Weekly 17/2020). The agreement went into force at the beginning of May and will continue until April 2022. The oil price has been further boosted by decisions of several OPEC+ countries, most notably Saudi Arabia, to cut production even more than the agreement requires, as well as a contraction of production in other oil-producing countries such as the US. The International Energy Agency (IEA) estimates that global crude oil production contracted in May by about 12 million barrels a day. While oil production in Russia declined by 14.5 % y-o-y in May, it was only down 2.3 % for the January-May period. At the beginning of June, the OPEC+ countries agreed to extend the May-June cuts through the end of July. Oil prices have also been lifted by a slightly improved demand outlook with the reopening of many economies from corona shutdowns. Nevertheless, the IEA expects global oil demand to fall this year by about 8 million barrels a day and to remain below 2019 levels in 2021 by over 2 million barrels a day.

Higher oil prices are reflected in the ruble’s exchange rate. Although the ruble has appreciated roughly 5 % against the dollar and about 1 % against the euro over the past month, the ruble-dollar and ruble-euro rates are still about 12 % weaker than they were at the start of the year. 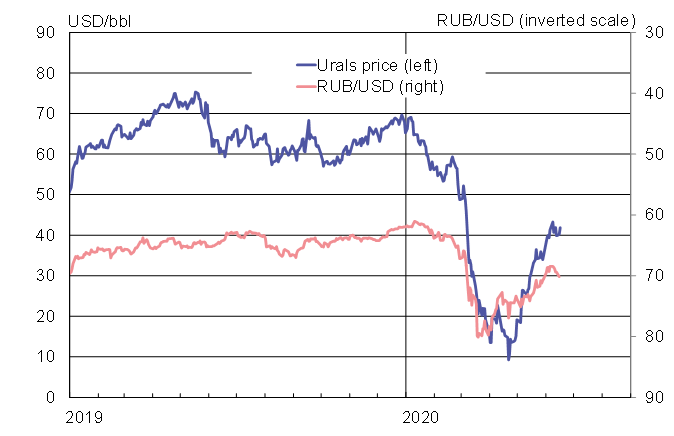