The net inflow of foreign direct investment into Russia last year was $32 billion, a huge jump from the previous year’s exceptionally weak numbers. Last year saw also new equity investment instead of just reinvested profits. In contrast, the net outward FDI flow from Russia shrank last year to $23 billion. UNCTAD’s latest World Investment Report expects FDI flows, both globally and in the specific case of Russia, to contract by 30–40 % this year due to the corona pandemic.

While FDI is often considered an important indicator of the degree to which a country is integrated with the global economy, phantom investment flows may blur the picture. Phantom investment refers to flows that are conducted via third countries for such purposes as tax planning. According to a working paper published by the IMF last year, phantom investments could account for as much as 40 % of global FDI flows. In the article, it is estimated that in Russia’s case about a quarter of FDI inflows to Russia are actually of domestic origin. Only in China the share of FDI inflows with domestic origin is slightly larger. UNCTAD’s 2017 estimate found that Russia’s main providers of FDI (with third-country effects removed) were the US, UK and Germany. 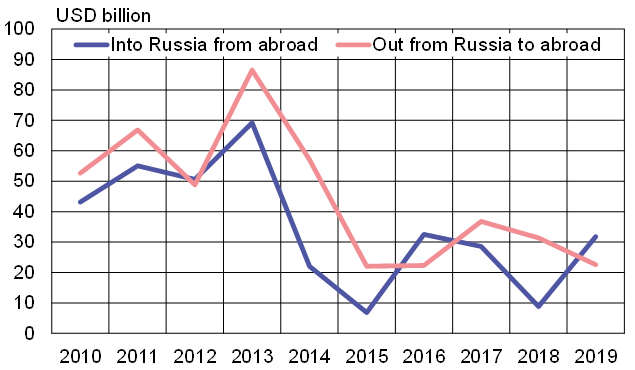