The weighted average interest rate on unsecured overnight interbank ruble loans, or Ruonia (Ruble Overnight Index Average) is a key reference rate for Russian money markets. The Ruonia rate, which has been calculated since 2010, was previously administered by market participants. On May 21, responsibility for administering the rate was transferred to the Central Bank of Russia. The CBR is now fully in charge of the methodology, calculation and publication of this benchmark rate. The change was driven by changes in international practice, the EU regulation, as well as the need for operational continuity.

The Ruonia rate is based on data provided to the CBR by the largest banks active in the interbank market. It is used as a benchmark in pricing of loans and bonds, and even is used in setting rate for certain finance ministry instruments. The CBR uses Ruonia rate as one of the indicators in assessing monetary policy transmission and money market liquidity.

Another fixing rate, which coexists with the Ruonia rate, is the traditional MosPrime (Moscow Prime Offered Rate), which is administered by the National Foreign Exchange Association. It is based on the ruble offer rates of eight major contributor banks. While the significance of the MosPrime rate has declined in recent years, it still plays a central role in derivatives trading. For example, the MosPrime rate is used in fixing the rates of most ruble interest rate swaps. The CBR continues to publish also MIACR interbank lending rates, which are based on actual rates in the whole banking sector. 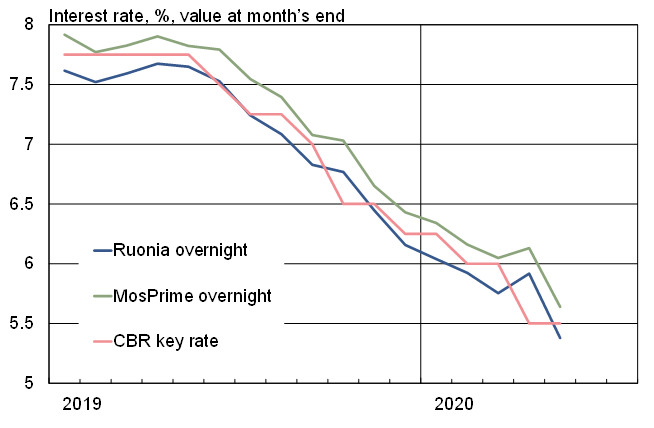