Preliminary figures show that Hong Kong’s GDP fell by 8.9 % y-o-y in the first quarter, the sharpest drop since figures began to be kept in 1974. The increase in public consumption (up 8 % y-o-y) was insufficient to offset the declines in private consumption (down 10 %) and fixed investment (down 14 %). In late April, Hong Kong’s financial secretary Paul Chan said that GDP could contract by as much as 7 % this year. The IMF’s April forecast expected a contraction of less than 5 %. The Hong Kong economy shrank by 1 % last year.

The flow of tourists to Hong Kong came to an almost complete halt with the global coronavirus outbreak and imposition travel restrictions in February-March. The number of tourists arriving in March from mainland China (about 80% of all tourists) was just 30,000 (compared to 4.5 million in March 2019). Retail sales suffered from the collapse in tourism, driving March retail volume down by 44 % from a year earlier (down 47 % y-o-y in February). National accounts show that goods exports in the first quarter fell by 10 % y-o-y (imports down by 11 %). Due to the collapse of tourism, the decline in services trade was even steeper with 38 % y-o-y decrease in exports and 25 % in imports. The value of goods exports to mainland China decreased by more than 20 % y-o-y in January, but grew by 10 % in February and March.

Hong Kong has unveiled a massive recovery package, which the IMF reckons to equal roughly 10 % of GDP. Measures include a 10,000 HK dollar (1,200 euros) cash subsidy to all adults permanently residing in Hong Kong (cost: 2.5 % of GDP), establishment of a support fund for restaurants, shopkeeper and tourism-related businesses (cost: 1 % of GDP), business employment subsidies covering up to half of wage costs for six months (cost: about 3 % of GDP), as well as various tax cuts and relaxation of payment schedules. Efforts have also been made to improve liquidity in the banking sector. Corporate loan payments have been extended and state-guaranteed loans have been made available to small firms.

Mainland China’s political grip on Hong Kong has tightened recently, leading to increased local dissatisfaction with official treatment of the special administrative region. Together with the US-China trade war, they have already dented the region's economy for couple of years. The Markit PMI last showed a positive growth reading (i.e. a reading above 50) in March 2018. Global financial market volatility and unrest have hurt the outlook for Hong Kong’s financial sector, although there are no signs of a large capital outflows at the moment.

Lockdown measures to control spread of the coronavirus have been relaxed in May. Since the end of last week, bars and cinemas have been permitted to open and number of persons allowed to congregate has been raised to four to eight. Schools are set to open at the end of May and workers are gradually returning to their offices. Pro-democracy demonstrations have also increased in recent weeks along greater intensity in government retaliation. As tensions increase and the incomes of mainland Chinese consumers decrease, it is unlikely that Chinese tourists will provide quick relief to Hong Kong’s struggling economy – even after the lifting of corona restrictions. 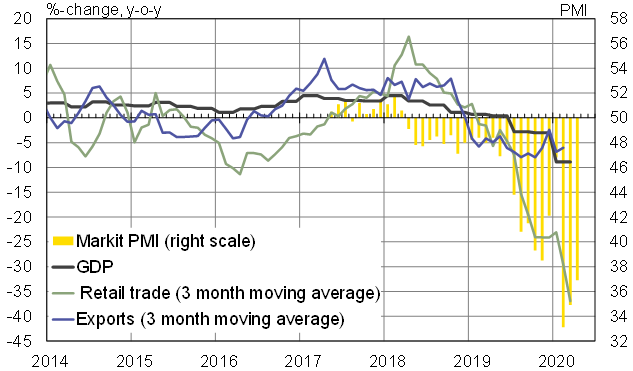