Consumer price inflation in China fell by a percentage point to 3.3 % in April, while producer price deflation accelerated to 3.1 %. The slowdown in consumer price inflation largely reflects improved supply of many food products (particularly pork), which has lowered food prices in the recent months. The worsening of producer price deflation reflects reduced demand caused by the COVID-19 crisis. In addition to lower revenues, deflation makes it difficult for firms to service their debts due to higher real interest rates.

With China facing persistently challenging economic conditions, the People’s Bank of China promised further monetary easing when it released its first-quarter monetary policy report on May 10. It did not, however, specify what sort of stimulus measures were envisioned. The PBoC has made monetary policy more accommodative this year through the granting of special credits, lowering the reserve requirement ratios for banks and adjusting its medium-term lending facility (MLF) rates, which it uses to fine-tune longer-term liquidity (3-, 6-, and 12-month loans) and which guide commercial bank lending rate policy. The one-year MLF rate is currently 2.95 %. The PBoC’s monetary policy report further noted that it had lowered the short-term lending facility (SLF) used to guide short-term rates (overnight, 7-day and 1-month) by 3o basis points on April 10. The rate on the 7-day SLF credit, which sets the ceiling for central bank interest rate corridor, is now at 3.2 %. Monetary easing was also seen in April with the lowering of the rate paid on non-required commercial bank deposits (excess reserves) with the central bank which forms the lower bound of interest rate corridor (it was the first change in this rate since November 2008). In January-March, the weighted average interest rate charged by banks to customers fell by about 50 basis points from the previous quarter to around 5 %.

As in March, April credit growth exceeded market expectations. Growth in the bank credit stock accelerated to around 13 % y-o-y, which, in combination with strong growth in corporate and local government bonds, ensured continued growth in aggregate financing to the real economy, even as lending in the shadow banking sector continued to decline. The rapid growth of the credit stock and collapse of nominal GDP in the first quarter caused a significant increase in the debt-to-GDP ratios.

China’s indebtedness issues have made the PBoC wary of appearing overly eager to apply strong monetary stimulus measures. In any case, it is challenging for an outsider to assess China’s actual monetary policy stance. In addition to interest rates, various reserve requirements and macro-prudential measures, officials orchestrate bank behaviour through “window guidance” orders that are not disclosed to the public. The difficulties to assess the monetary policy stance is illustrated by the latest cut in the SLF rate (a key monetary policy instrument) in early April, which was revealed only a month later. 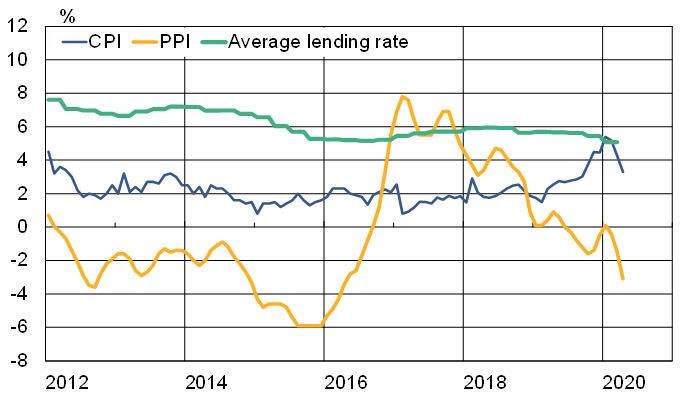