Somewhat surprisingly, China Customs reports that the dollar-value of goods exports increased by 3 % y-o-y in April. The value of goods exports had decreased by 13 % y-o-y in the first three months of the year. April witnessed booming growth in exports of COVID-19 related personal protective equipment as well intermediate products for their production and surgical and medical equipment. Observers also noted that exports were likely driven by efforts to fill pre-crisis orders that companies had been unable to meet during the corona lockdown in January and February. Company surveys (e.g. PMI readings) indicate new export orders have decreased rapidly and exports are expected to decline in coming months.

The value of Chinese goods imports decreased by 14 % in April. The drop in crude oil imports in itself accounted for an estimated 5 percentage points of the contraction, with lower prices for other forms of energy and unprocessed plastics accounting for another percentage point of the decline. The value of imports in China’s top import category, machinery & equipment, fell by only a few percent. China’s imports contracted from almost all countries.

Tensions between China and the US have increased in recent weeks. Bilateral trade is again central in the discussion as Chinese goods imports from the US continued to decline in April (down 11 % y-o-y). Both the US and China have signalled that China is still committed to “phase one” of the US-China trade agreement signed in January. The agreement requires that China purchase at least 144 billion dollars of specified goods from the US this year. US export figures show that the value of such products exported to China in January-March amounted to less than 15 billion dollars. In order to achieve the agreed quota, China needs to buy the same amount of goods in in each remaining month of this year as it did in the first three months in total. To boost imports, China announced that it would abolish additional tariffs on 79 American products next week. It is hard to see how China manages to meet its agreed purchase quota. 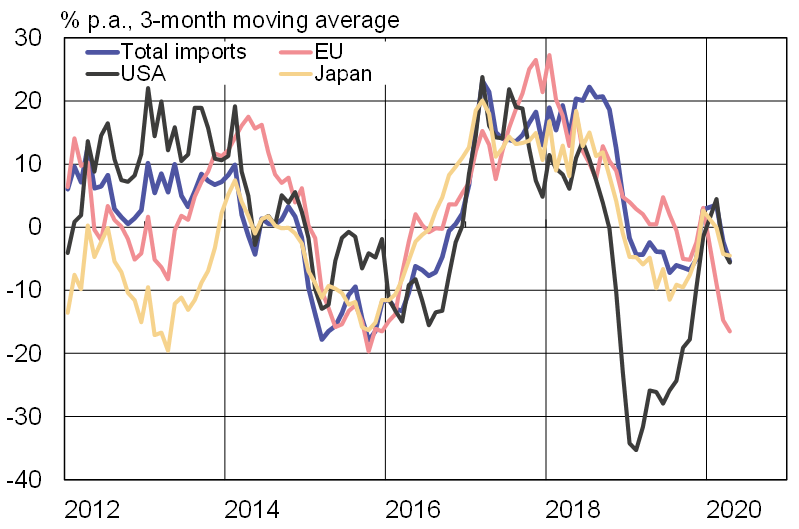