Nominal on-year growth in Chinese fixed investment slowed over the past decade from over 30 % to just 5.4 % last year as profitable investments became harder to identify and old projects remained mired in debt. The big collapse, however, only arrived in the first two months of this year, when fixed investment contracted by 25 % y-o-y (manufacturing was off by nearly 33 %). The situation improved a bit in March and more in April, so that the contraction in fixed investment for first four months was on estimate around 10 % y-o-y in real terms.

Although recovery measures after the first wave of the coronavirus epidemic have focused of normalising consumption, fixed investment has also been supported through monetary and fiscal measures. Key interest rates have been lowered and banks have been encouraged to lend to firms. The quotas for regional specialty bond issues have been increased to promote infrastructure investment.

China's economic structure is gradually evolving to more service and consumer-oriented. At the same time, fixed investment is increasingly directed to high technology and “new infrastructure” of which 5G network has been a good example for a few years already. China is now rushing 5G network construction to help with recovery from the COVID-19 pandemic. The new network not only adds speed and capacity to mobile communications, but facilitates e.g. the Internet of Things, virtual reality and self-driving vehicles.

The Ministry of Industry and Information Technology reports that there were 198,000 5G base stations in China at the end of March this year, and that China’s current goal is to add over 600,000 more base stations around the country by the end of this year. The ministry estimates that the cost of building a 5G network during 2020–2025 to achieve near-complete national coverage will cost roughly 1.2 trillion yuan. The benefits from having a national 5G network are increased by about threefold sum of support to production chains and other business related to 5G.

Estimates of the short-term economic impacts of the 5G project are wide-ranging. The official view is that the stimulus benefits are substantial (over 10 trillion yuan directly over five years and almost 25 trillion yuan indirectly in the same period). In contrast, researchers at Gavekal Dragonomics claim that short-term economic impact of the 5G networks will be limited and 5G should be treated as a political objective. China has declared its intention of becoming a major player in information and communication technologies. 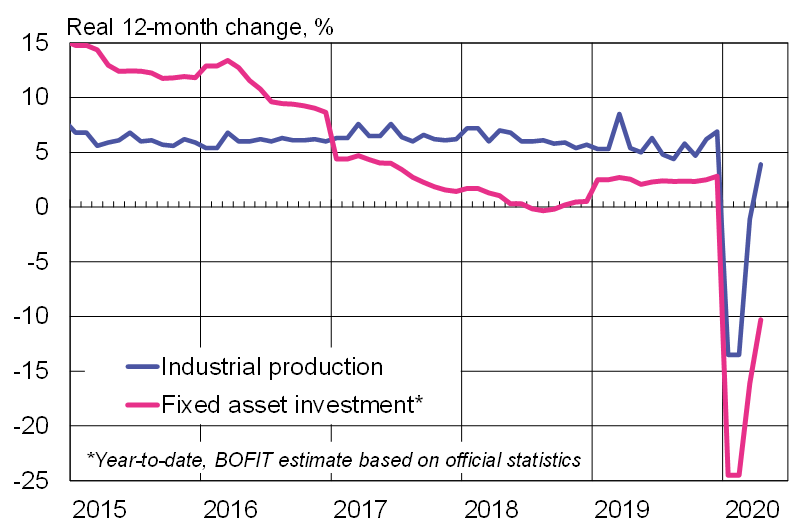