While detailed information on capital movements has yet to be released, the available data show that capital flows were quite balanced, as China’s foreign currency reserves shrank by 25 billion dollars in January-March. The net flow of capital in every quarter of 2019 was clearly outbound from China. Balance-of-payments figures show that direct foreign investment in China in the first quarter of this year amounted to only 33 billion dollars, a significant drop from 1Q19. Outward FDI from China was 19 billion dollars, only slightly less than in 1Q19. Some observers suggest that the balancing of net capital flows at the beginning of the year may reflect more foreign portfolio investments into China as yields there were higher than in most major markets. The impact of the global corona crisis on investor behaviour and investment in China should become apparent in coming quarters.

To attract portfolio investment, the PBoC announced this month that quotas for QFII and RQFII programmes for foreign institutional investors would be phased out and that repatriation of investments made under the programmes would be facilitated. The practical significance of the decision, which enters into force in June, should to be limited, however, as the current quotas have long been underexploited as foreign investors have found other ways to invest in China. 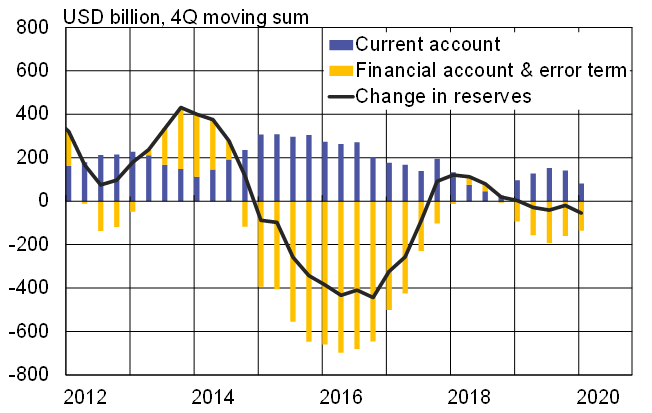