The volume of crude oil imports to China over the first three months of this year increased by 5 % y-o-y (value up by 8 % measured in US dollars), suggesting import volumes and prices had yet to feel the full impact of the corona crisis. By March, however, the collapse in domestic demand was well reflected in decreased oil refining activity and building up of inventories became an important driver of crude imports.

While domestic refining decreased by 7 % in March, crude oil imports rose by nearly 5 % due to existing import agreements and government and commercial operators taking advantage of low prices and replenishing stocks. By some estimates, nearly all of China’s storage capacity for crude oil and petroleum products has been utilised, causing a rush to build new storage capacity. As elsewhere, oil tankers have been leased to store some of the purchases. The AP reports the government claimed China’s national strategic oil reserves were adequate to meet 80 days of consumption as of last September. Now the government is likely increasing also these reserves.

Thanks to new refining capacity, China’s net exports of petroleum products have rapidly increased to 40 million metric tons a year. This, in turn, has driven increased imports of crude oil. The corona pandemic, however, has decreased demand for petroleum products elsewhere in Asia. This situation could depress Chinese oil refining and crude oil imports in coming months. Reuters reports that China lowered domestic prices on gasoline and diesel fuel in March by a record 14–16 % using the pricing mechanism in place since 2013. Authorities have noted, however, that fuel prices would not be lowered further if the price of oil fell below $40 a barrel. These factors, together with full inventories, limit the likelihood that a recovery in Chinese demand will bring rapid relief to the global oil market.

China’s top oil suppliers are Saudi Arabia (which accounts for 17 % of China’s annual imports) and Russia (16 %). Otherwise, China has distributed its international oil sourcing quite broadly. In light of current geopolitical and trade tensions, it is notable that China’s reliance on Iranian oil has evaporated (now under 2 %) and that Chinese official figures show that it has not imported any oil from Venezuela since last September. Moreover, China has imported no crude oil from the US this year, despite the fact that it has committed to significant increases in imports of energy products under the “phase 1” trade agreement signed in January.

China has the world’s second-largest demand for crude oil after the US. Imports now satisfy over 70 % of domestic oil demand, making China the world’s largest importer of crude oil (about a fifth of international oil trade). While China is a key player in the global oil market, its reluctance about releasing information on its oil reserves make it difficult to assess the market situation. 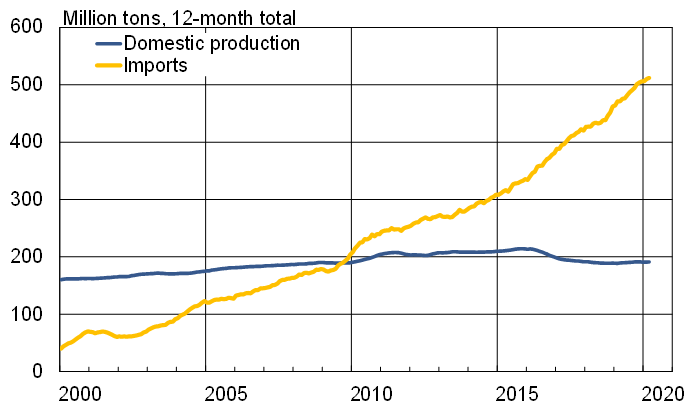