Last week (Jan. 15), representatives of China and the United States met in Washington DC to sign the Phase 1 trade agreement set to go into effect within 30 days of signing. The heart of the deal involves increasing the level of US imports to China. Most terms of the agreement, however, just reiterate reforms that have already been largely implemented or announced by China. Changes include such general measures as opening up markets to American companies and enhancing copyright protection. Tough trade issues such as Chinese government subsidies, industrial policy and cybersecurity are not covered in Phase 1.

China promises that during 2020 and 2021 it will purchase goods and services worth at least 200 billion dollars in excess of the value of its purchases in 2017 before the trade war started (US figures for 2017 show that trade in the affected categories was worth 135 billion dollars). The product categories covered in the agreement accounted about 60 % of US goods exports to China in 2017 and practically all services exports.

The Chinese have committed to substantial purchases from US producers. The total value of Chinese goods imports last year was about 2.1 trillion dollars, of which 122 billion represented imports from the US. Under the agreement, China promises to increase from 2019 levels its purchases of agricultural products by 130 %, energy by 550 %, finished goods by nearly 70 %, and services by 20 %. Many observers point out that the agreement violates both countries’ WTO commitments and likely distorts international markets. A fresh estimate published by the Kiel Institute for the World Economy suggests that quota purchases from the US under the deal would reduce EU exports to China in 2021 by more than 10 billion dollars and exports to China from the rest of the world by 50 billion dollars.

The agreement demands little from the US in return. As a symbolic gesture ahead of signing, the US abandoned its claim that China is a currency manipulator. The US also dropped its scheduled imposition of additional tariffs in December 2019 and will reduce by half the 15 % punitive tariffs imposed in September 2019.

The countries agreed to have high-level meetings on implementation and other issues that might arise under Phase 1. Many observers expect that China-US tensions to flare at some point as the agreement does nothing to rein in China’s controversial practices. President Donald Trump said that he expects Phase 2 talks to get underway shortly. 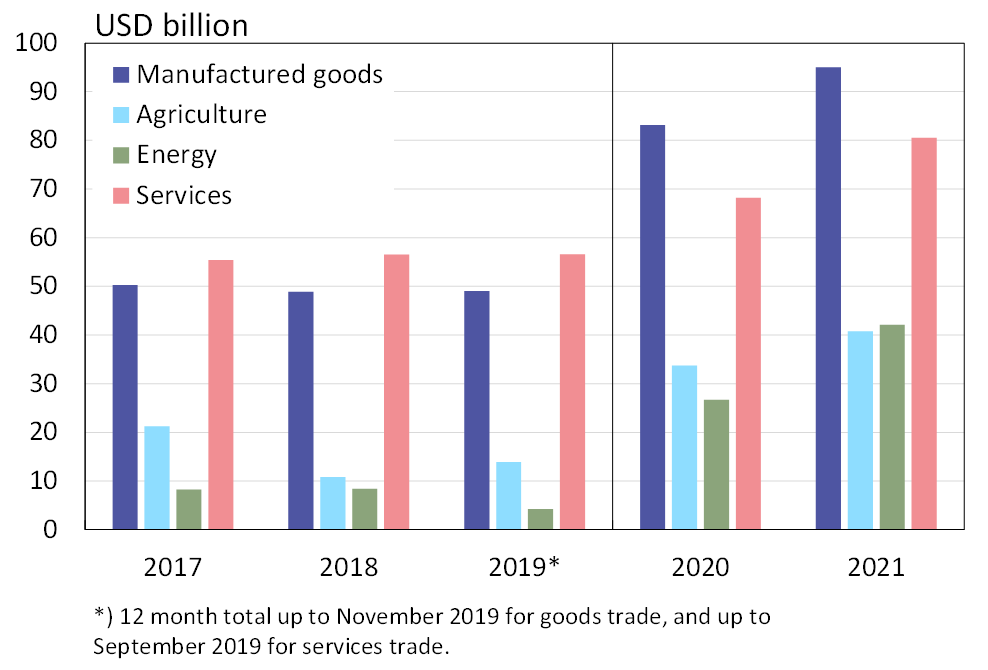 Sources: US Census Bureau, Phase 1 of the US-China trade agreement and BOFIT.