China’s National Bureau of Statistics (NBS) reports a severe contraction in first-quarter GDP (6.8 % y-o-y and 9.8 % q-o-q). It was the first contractionary episode reported since the NBS began to publish quarterly data in 1992. The last on-year contraction in Chinese GDP was recorded in 1976. No official growth target has been set for this year as the coronavirus epidemic has led to the postponing of the National People’s Congress, which is traditional held in March. The NPC is scheduled to start on May 22.

Official figures show that 4.4 percentage points of the contraction in GDP came from reduced consumption expenditure, 1.5 percentage points from lower investment and one percentage point from the drop in net exports. On the supply side, manufacturing and construction (which accounted for 39 % of GDP in 2019) shrank by 10 % in the first quarter. Production of services (54 % of GDP) was off by 5 %.

While industrial output, retail sales and fixed asset investment (FAI) all increased in March from February, they all saw on-year declines. For the first quarter, retail sales were down by about 22 %, industrial production by 8 % and FAI by about 16 %. The index of service production published by the NBS also decreased by 12 %. Given these numbers, a contraction in services of 5 % seems rather modest. China’s GDP data are quite opaque and the reported figures do not give a realistic picture of economic trends. It is quite likely that the first-quarter GDP contraction was more severe than reported. Revised Bank of Finland estimates (see BOFIT discussion paper), for example, show that the economy contracted by nearly 10 % y‑o‑y in the first quarter of 2020.

Economic forecasts have been dramatically lowered in recent weeks in response to the COVID-19 pandemic. The latest IMF forecast sees the Chinese economy growing by just over 1 % this year. Some institutions have yet to update their forecasts to reflect the deepening corona crisis. For example, FocusEconomics's May consensus forecast for China’s growth this year sits at 1.9 % (within a range of -1.5 % to 4 %), which is nearly two percentage points lower than a month earlier. The restart of the economy after the corona lockdown has been more challenging than many expected, and the impacts will no doubt extend well beyond the first quarter. The contraction in the Chinese economy projected in our latest BOFIT forecast, published in March, now seems increasingly likely.

The economic recovery has slowed in recent weeks. While official restrictions on movement and gathering have been largely lifted, consumer demand remains weak due to falling incomes, reduced employment and fears about COVID-19. Research firm Trivium estimates that economic activity, which initially roared back from a dead stop in mid-February to around 68 % of normal by mid-March, is now recovering more slowly and reaching about 83 % of normal as of mid-April.

According to daily activity indicators, some industrial sectors have already ramped up production to levels approaching those of last year. For example, coal consumption at power plants has matched the same level as last April on some days. However, the intensity of night lights in industrial plants is still down by about 20 % from last year’s levels. The real estate business has revived from a full stop in early February, but is still only at around 75–80 % of last year’s activity. Private car use has increased, but the number of people using public transport is only about half the level of last year. Most leisure-time service providers such as movie theatres remain closed.

Monthly indicators showed larger contraction than GDP in the first-quarter 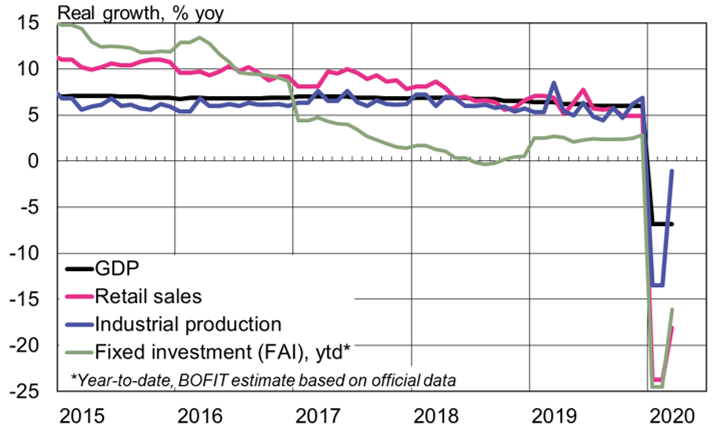