Taiwan’s current president since 2016, Tsai Ing-wen was re-elected this month to a second term. Tsai, the member of the Democratic Progressive Party (DPP), won with 57 % of the vote. Her platform stressing the right of Taiwan to sovereign independence and democracy was well-received by voters, boosted by the fact that the same themes have topped the political agenda in Hong Kong since protests began last summer. The election result was seen as a defeat for China’s leadership, especially president Xi Jinping, who has stepped up his demands for reunification of Taiwan and its 24 million inhabitants with the People’s Republic of China.

Besides political tensions, economic relations between the two countries have been affected by China’s slowing growth and the US-China trade war. In 2019, the value of Taiwan’s goods exports in US dollar terms declined by more than 1 %, while exports to China fell by 5 %. At the same time, Taiwan’s exports to the US grew by 17 %. The trade war has forced restructuring of production chains as many companies operating in China have moved some of their production to Taiwan.

The Taiwanese economy is highly dependent on foreign trade. The ratio of exports of goods and services to GDP is currently around 65 %. Even with the political tensions with the mainland, China is still Taiwan’s top trading partner. Last year, 28 % of Taiwanese exports went to China, followed by the US, which accounted for 14 % of exports.

Taiwan’s export industries, fixed investment (23 % of GDP), and economy generally have benefitted from the partial transfer of production from the mainland to Taiwan. Taiwanese GDP rose by 2.7 % y-o-y in 2019, roughly the same pace as in 2017 and 2018. The country also produced a strong current account surplus last year (over 10 % of GDP) and a smallish budget deficit (about 1 % of GDP). Taiwan’s government debt (32 % of GDP) is modest by international standards, inflation (1 % p.a.) is low and the exchange rate of the new Taiwan dollar has been relatively stable. Taiwan’s economic growth this year is expected to be about the same as last year.

Change in US dollar value of Taiwan’s goods exports, % 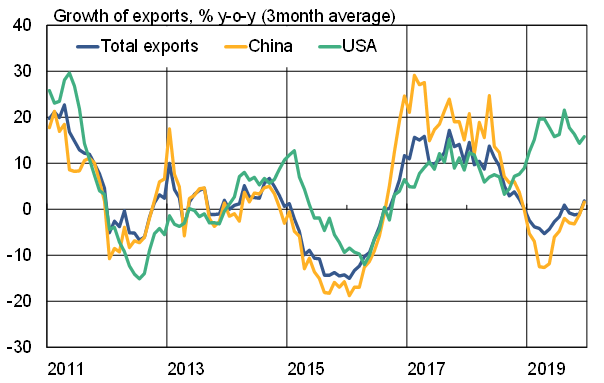