The results from the census, which was conducted by the National Bureau of Statistics in 2018 and shows the situation at the end of last year, were released last month. The previous census was conducted in 2013. Over the following five years, the number of entities (mainly corporations) operating in the industrial or service sectors doubled to nearly 22 million. The number of employees rose by 7.6 % to 383 million. The survey did not cover the agriculture sector.

The census data have been used, among other things, to update last year’s nominal GDP estimate, which was boosted 2.1 % to 91.93 trillion yuan (13.9 trillion dollars). The value of services output was adjusted up by 4.3 %, with the service sector accounting for 53.3 % of GDP and the industrial sector 39.7 %. Revised real GDP figures have yet to be released.

Number of firms and employees by branch in 2018 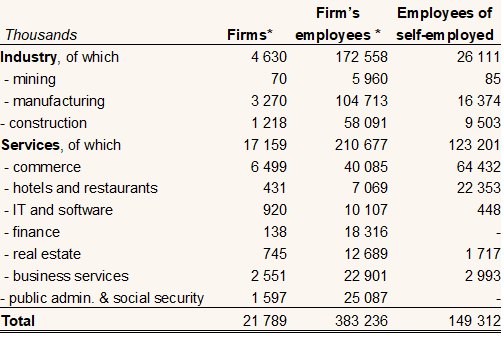 Sources: NBS and BOFIT. *Corporations and other legal entities.