Official figures show GDP growth holding at 6.2 % y-o-y, down from first quarter growth of 6.4 %. China’s National Bureau of Statistics (NBS) attributes the continued strength in growth to the trend in net exports, which contributed by around 20 % of the growth. In the first half, average real disposable incomes were up 6.5 % y-o-y, slightly outpacing GDP growth.

Growth in retail sales and industrial output accelerated in June with both growth measures exceeding 6 % y-o-y in real terms. NBS retail sales figures show that value of car sales rebounded by 17 % y-o-y in June after declining in January-May. The pick-up in car sales may be explained by a change in emission standards in many provinces that forced dealers to reduce stocks by offering cars at substantial discounts ahead of the change. However, the China Association of Automobile Manufacturers (CAAM) observed that the volume of car sales was still down by 10 % y-o-y in June. CAAM said that car sales were down 12 % y-o-y in the first half.

Growth in fixed investment has revived a bit this year on increased public investment. While monthly figures for China’s investment trends only give a rough idea of what is actually happening, the real increase in fixed asset investment (FAI) in the first half was around 2 %. Investment of state-owned enterprises has risen this year by about 3 % y-o-y in real terms. In the 1H18, FAI of state companies declined.

The rise in food prices continues to be driven by the African swine fever virus. Even so, consumer price inflation in June was unchanged from the May reading of 2.7 %. Core inflation (food and energy prices excluded) remained at 1.6 %. Producer price inflation fell to zero in June. 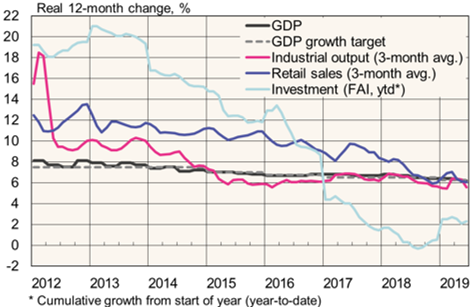