British Petroleum’s (BP) latest issue of its Statistical Review of Global Energy finds that Russia accounted for 13 % of world oil production, 17 % of natural gas production and 6 % of coal production in 2018.

The volume of Russian oil & gas production has increased by about 10 % from the level in 2010, while hydropower production has grown by about 15 %, nuclear power 20 % and coal production 45 %. The rates of growth are roughly in line with average global growth in production, as Russia’s share of the global production has remained roughly the same in recent years (see chart). Russia accounted for just 0.1 % of global renewable energy production last year.

In recent years, Russian natural gas companies have invested heavily in gas liquefaction facilities. There is high demand for LNG in East Asia, particularly Japan, China and South Korea. According to BP, Russia’s share of global LNG exports was 6 % in 2018. However, Russian gas producers want to increase LNG production dramatically over the next decade. Around 70 % of Russian LNG exports went to markets in Asia and majority of the rest to Europe. UK and France together accounted for around half of the European exports. The first LNG shipment from the liquefaction plant on the Artic Yamal peninsula via the Northeast passage to the Pacific Ocean departed on June 29. LNG carrier ships with ice-breaking ability can make the journey without the need for accompanying ice-breaker vessels. The Northeast passage is still only traversable in summer. 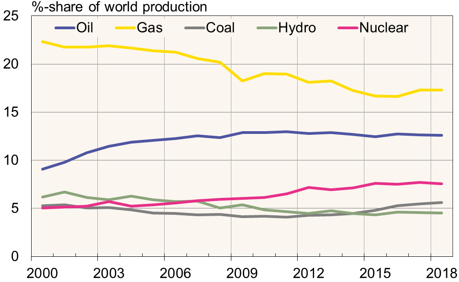