According to the NBS, the volume of completed building area (measured in terms of floorspace) in 2017 and 2018 declined relative to previous years and that the drop continues this year. The volume of real estate sales has been quite steady, however, and the inventory of unsold real estate has declined.

The volume of new buildings completed in the first three months of this year fell by 11 % from the same period in 2018 to 185 million m2 of floorspace. Of that, 130 million m2 was residential buildings. In contrast, building starts measured in floorspace were up by 12 % y-o-y in the first quarter.

The total floorspace of buildings sold in January-March was 298 million m2, of which residential apartments were 260 million m2. Both declined slightly from the same period last year. Sales have risen steadily overall at the national level, and last year apartment sales measured by floorspace were up by 2 % from 2017. There are huge regional differences in sales trends, however. For example, apartment sales in Beijing recovered considerably in the first quarter from last year’s decline, while apartment sales in Guangdong, one of China’s largest provinces, saw its decline in apartment sales continue.

Chinese regulations on buying and selling apartments are city-specific, so sales volume and price trends vary considerably. In many small or mid-sized cities, prices are rising at 10–20 % y-o-y. Most of the decline in prices take place in China’s big cities. Housing-market tracker SouFun found that in March average prices were lower than year ago in 5 of its 99 cities surveyed. The weighted average price per square metre of apartment floorspace rose by 4 % y-o-y. The price levels in Beijing, Shanghai and Shenzhen are now the same as in March 2018. 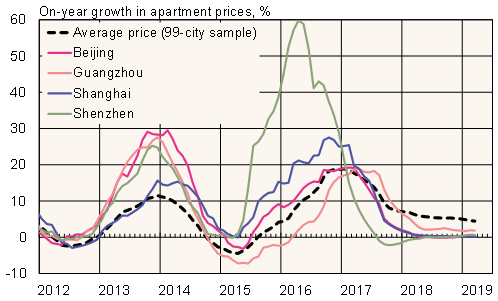