The consolidated budget forecast released in April sees budget revenues increasing this year at about 3 % p.a. and at around 4 % p.a. in 2020−2021. That is slightly below inflation. The forecast, which comprises federal, regional & local budgets and state social funds, extends to 2036.

Revenues from oil & gas taxes substantially weigh on the revenue outlook. They rose hugely in 2018. This year they are expected to decline tangibly and then stay over 10 % smaller than last year. The estimate for the level of oil & gas tax revenues is unchanged from last autumn’s forecast, as is the budget assumption about the price for Urals crude: over 63 dollars in 2019 and 58 dollars in 2021.

The GDP growth forecast for 2019−2021 also remains unchanged from last autumn, i.e. an acceleration in growth (1.3 % this year, 2 % in 2020 and over 3 % in 2021). The estimated level of other consolidated budget revenue streams than oil & gas tax revenues has risen a bit following last year’s rapid rise that was also much faster than forecast (particularly profit tax and VAT revenues). They are expected to increase by 6−7 % this year and by about 6 % p.a. in 2020−2021 (the latter about the same pace as in last autumn’s forecast).

The levels of consolidated budget spending estimates for 2019−2021 have been raised slightly after spending increased faster than forecast in 2018. The pace of spending growth remains very much the same as in last autumn’s forecast at around 6 % p.a. or 1.5−2 % higher than inflation. Funding of national projects ordered in president Putin’s May 2018 inaugural Decree is included in spending estimates.

The budget surplus will shrink this year to about 1.5 % of GDP and to 1 % of GDP next year. The calculational budget deficit at the fiscal rule’s low oil price for the next few years is about 1.5 % of GDP. The rule mechanism will replenish the National Welfare Fund so that its liquid assets exceed 10 % of GDP in 2021 if no additional monies from the Fund are committed by e.g. granting loans for projects. This savings part of the rule forces the government to borrow to cover spending. The government debt will rise to 15.5 % of GDP in 2021. 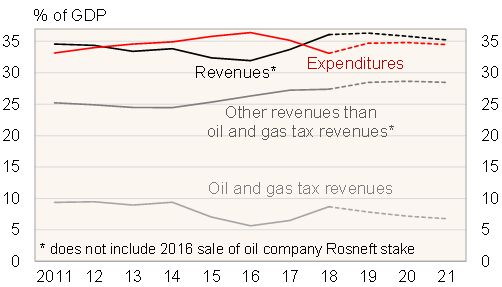