Flows of direct investment to and from Russia’s non-bank corporate sector have been smaller over the past five years than earlier. This concerns inbound FDI to Russia especially, even though they rose temporarily due to two individual relatively massive investment operations in the period (the ownership restructuring of the TNK-BP joint venture between the Russian state oil giant Rosneft and BP in 2013, and the sale of a large stake in Rosneft to foreign investors in 2016). FDI flows into Russia’s corporate sector over the past decade have almost continuously been smaller than FDI outflows from the Russian corporate sector.

As in previous years, most 2018 FDI inflows to Russia’s corporate sector were reinvested profits. Intragroup credit between parent and subsidiary companies became a popular practice a decade ago to bring capital into Russia but that has shifted in recent years to a slight drain of capital out of the country. Owning more equity in Russia has not been quite appealing: net inflows of inward share capital (excluding Rosneft arrangements) have been small over the past ten years. Last year even saw the situation where that net flow was an exceptionally large negative. This could also be seen in the fact that, for the past couple of years, foreign companies launched fewer new firms in Russia than earlier and the number of closures of established foreign firms in Russia rose.

The types of finance in Russia’s corporate sector FDI outflows, in contrast, remained quite diverse. Reinvestment of profits has stayed popular, while investment in share capital and lending by Russian parent companies to their foreign subsidiaries also retained their roles. 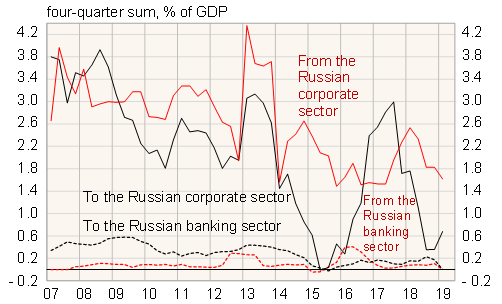