The value of Chinese exports in the first three months of this year (USD 552 bn) represented an increase of just over 1 % from a year earlier, even if on-year growth in March accelerated to 14 %. The value of imports (USD 475 bn) declined in 1Q19 by 5 % y-o-y. March imports were down by nearly 8 %. The first-quarter goods trade surplus was 76 billion dollars, up from 45 billion dollars in 1Q2018.

The revival of on-year growth in exports in March was driven by demand in EU markets (up 24 %), but strong growth was also registered elsewhere. Exports to the US in March were up 4 % y-o-y.

China’s slack demand for imports reflects persisting weakness in domestic demand. In March, imports from the EU fell by 5 % y-o-y while imports from the US were down by more than 25 %. Also imports from Japan, South Korea and Taiwan plunged. In addition to imports of finished goods from above mentioned countries, the volume of many key commodity imports have recently been in decline. 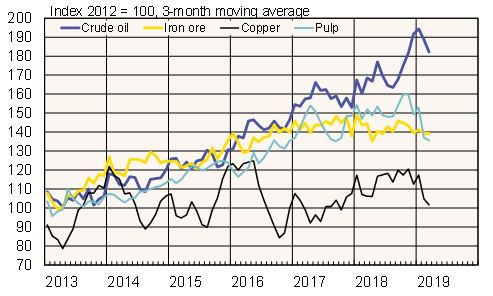