China’s National Bureau of Statistics reports that economic output increased by 6.4 % y-o-y in the first quarter of 2019, matching the growth pace of the previous quarter. The official GDP growth figure was higher than expected in light of weak indicator readings in January and February, and despite the anticipated growth gains of March. The extreme consistency of official GDP growth is less a reflection of actual economic trends than a showing that official growth targets are met.

The NBS also reports that March industrial output grew by 8.5 % y-o-y, well outpacing growth just over 5 % in January and February. While the revival in industrial output was broad-based, stand-out growth performances were seen in export branches such as equipment manufacture, electronics and textiles. The revival was not reflected in domestic consumption. Retail sales in real terms in March grew by less than 7 % y-o-y.

Consumer price inflation accelerated from 1.5 % in February to 2.3 % in March, mainly on higher food prices. The rise in producer prices also picked up from 0.1 % in January and February to 0.4 % in March. 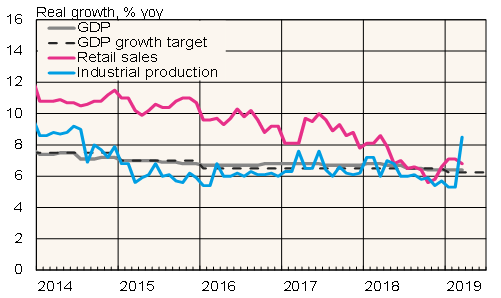