Market reforms in recent years have largely sought to attract financing to China. Regulation of direct investment of Chinese firms abroad has been tightened and possibilities for portfolio investment outside China has been restricted. For example, only the investment channel to mainland China has been opened for bond investment under the Bond Connect programme launched in 2017. The channel for Chinese investors to invest in the Hong Kong bond market remains closed.

However, the negative number in the “net errors and omissions” item suggests larger capital outflows than the recorded flows indicate. The net errors item, which has been negative for the past decade, mainly reflects unspecified capital flows. When the net errors item is included, China’s balance of payments was roughly in balance last year and its foreign currency reserves increased only by 19 billion dollars. 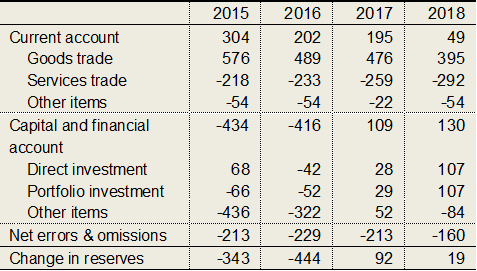