China has been quite strategic in distributing its sources of foreign oil. In recent years, Russia (16 % of China’s oil imports) has surpassed Saudi Arabia as China’s most important oil supplier. The shift reflects the completion in early 2011 of the China branch of the Eastern Siberia Pacific Ocean (ESPO) pipeline, as well as the inauguration of an additional pipeline section to China in January 2018. China’s oil imports from Russia rose by about 20 % last year to 72 million tons, of which about half was transmitted via the ESPO pipeline’s China branches. About a quarter of Russian crude oil exports now go to China.

Iran, long a major supplier for China, saw a sharp decline in the volume of oil exports to China last autumn. The drop likely reflects harsher US sanctions on Iran. Venezuela, which only a year ago accounted for over 5 % of China’s oil imports, has recently seen its share fall below 4 %. 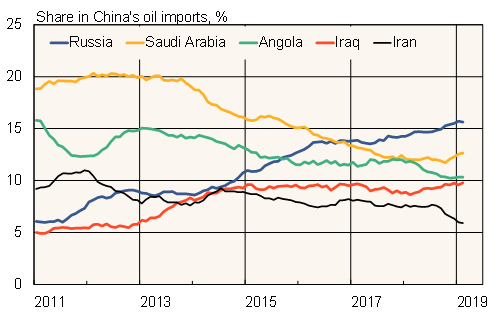