Rosstat reports that Russian car production rose by 13.3 % from 2017 to 2018. A total of 1.8 million passenger vehicles, busses and lorries were built in Russia, with another 300,000 vehicles imported. Russia currently has about 50 million cars on the road. Russia’s domestic production has gradually recovered in recent years from a dip in 2014–2016, but this winter the recovery has been slower.

The role of foreign brands in the Russian car market has fluctuated over the past three decades. Domestic production declined during the 1990s, and over half of the flow of cars into the market were imports by 2008. Since then, however, domestic production has made a comeback as foreign carmakers moved their assembly work to facilities in Russia.

Russian partners are often involved in plant projects of foreign automakers. Such joint ventures, for example, have allowed AvtoVAZ, known for its production of the Lada, to preserve significant market share. The popularity of German, American, Japanese and Korean cars has remained, but today four out of five cars that come to the Russian market are assembled in domestic plants. In recent years, foreign companies operating in the Russian market have shut down some of their production lines. FordSollers, the joint venture of the American Ford and Russian Sollers (formerly Severstal-Avto), announced in March that they were ceasing passenger car production and focusing on other light vehicles.

The core manufacturing centres of Russia’s car industry are located along the banks of the Volga River between Samara and Yaroslavl. Foreign manufacturers have also been attracted through various incentive arrangements to establish production in Kaluga, the Kaliningrad enclave and St. Petersburg. Lower car sales can have significant local impacts in smaller municipalities. For example, the city of Togliatti, with a population of about 700,000 people, is home to the AvtoVAZ plant. Even after major layoffs, the plant still employs 37,000 people. 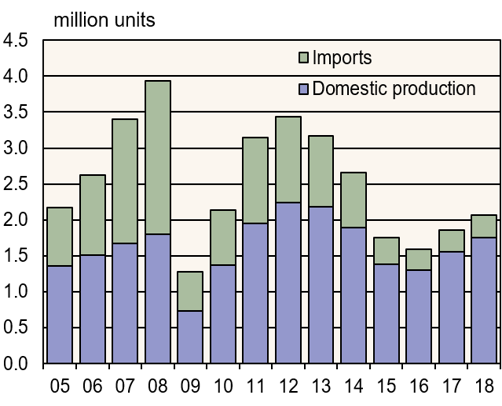