Rosstat’s fresh figures reinforce their first-round estimate that 2018 GDP growth at 2.3 % clearly beat out the 2017 performance (1.6 %). GDP growth in the first nine months of last year was adjusted upward to over 2 % (previous estimate 1.6 %). Mainly household consumption helped boost growth in the fourth quarter to 2.7 %.

The updated figures modify earlier views on the evolution of the main GDP components last year. Import growth was revised downward to just 2.7 %. The economy was still led by export growth, even if the new data show export volumes boomed (5.5 %) less than earlier announced. Fixed investment growth was revised up to nearly 3 %, while growth in public consumption was lowered to close to zero. 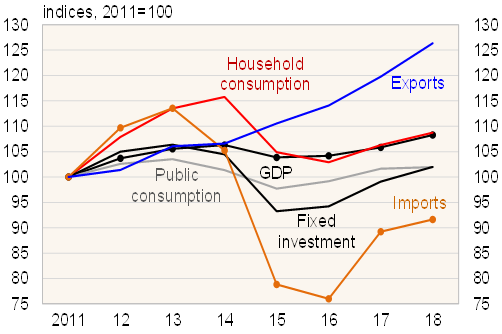