New GDP data show that among the largest sectors output of extractive industries and related services, as well as civil service and defence administration have been the fastest drivers of real growth over the past three years. The trade sector, as well as transport and warehousing also recovered gradually over the past two years and construction over the past year. After showing good growth a couple of years back, manufacturing saw a slowdown. In GDP statistics, output is measured by value-added produced in each sector.

Health care and social services stand out among the weakest sectors and have seen their value-added decline in real terms slightly in recent years. Increases in government budget spending on health care have largely focused on wage increases (especially last year) for workers in the sector. In practice, the rise in wages has mainly been reflected as higher prices in health care. 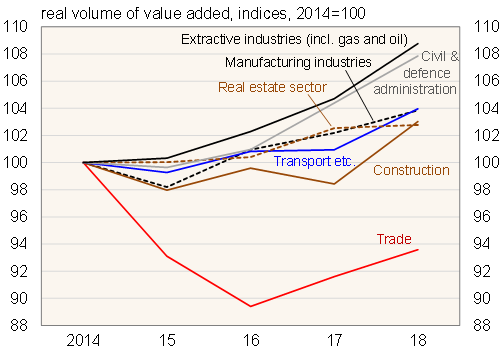