The slide in Chinese stock markets accelerated last week as in other stock exchanges around the world. The market value of shares listed on mainland China exchanges has dwindled this year by over 14 trillion yuan (2 trillion dollars). As in 2015, investors are demanding that the government intervenes to stabilise share prices.

The Shanghai Composite Index today (Oct. 19) was down 23 % from the start of the year, while the Shenzhen Composite Index was down by 34 %. Chinese share prices are now at lower level than in 2015, when the government introduced massive support measures for the stock markets. Hong Kong’s Hang Seng Index has fallen by 17 % this year and the index for mainland Chinese firms listed in Hong Kong is down by 12 %. There are roughly 3,500 A-share listings on the Shanghai and Shenzhen exchanges. Trading in the shares of over a thousand firms was halted on October 11, when their daily value declines exceeded the exchange’s 10 % limit.

To support its tanking stock markets, the Chinese government has requested that insurance companies invest more money in the stock market, particularly in private firms. Hundreds of firms have announced share buy-back programmes to support their share prices.

The risk created by declining share prices is amplified by the fact that shares are increasingly used as loan collateral in China. When share prices fall, so falls the value of the collateral. This can lead to forced sales of shares and accelerate stock market declines. Bloomberg estimates that roughly 4.24 trillion yuan of shares are pledged as collateral for loans, which translates to about 10 % of the total market capitalisation of Chinese stock exchanges.

On local level, state-owned entities have assembled funds to support the region’s privately-held listed firms. The Caixin business publication notes, for example, that the city of Shenzhen plans support packages for local exchange-listed firms. According to the publication, well over 100 of the nearly 300 firms listed on the Shenzhen exchange have posted over 20 % of their shares as collateral. 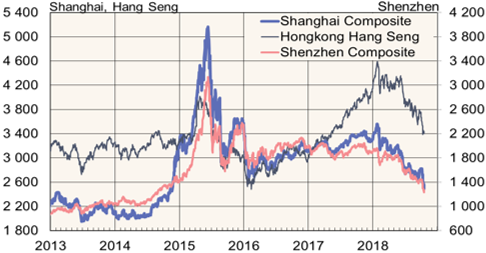