Russian GDP grew by 1.9 % y-o-y in the second quarter of this year, with seasonally-adjusted GDP rising 0.9 % from the previous quarter. In the second quarter, private and public consumption, as well as fixed investment, grew by 0.2 % q-o-q. The volume of exports grew by 1.3 % while imports contracted by 0.7 % q-o-q.

Growth in Russian domestic demand was quite modest in the second quarter, while net exports experienced robust growth. Import volumes have traditionally fluctuated strongly with the business cycle in Russia. Since mid-2016, import growth has been quite fast due to the recoveries of the ruble and domestic demand. However, the current ruble depreciation has reduced nominal growth in imports, which in principle boosts GDP.

Seasonally-adjusted growth in fixed investment has been positive since the start of 2016, albeit quite low. Investment is still nearly 10 % below its level at the start of 2013. Notably, fixed investment already began to contract in the first half of 2013 – already before the drop in oil prices or imposition of Western sanctions. This is a clear sign of challenges in Russia’s business environment. 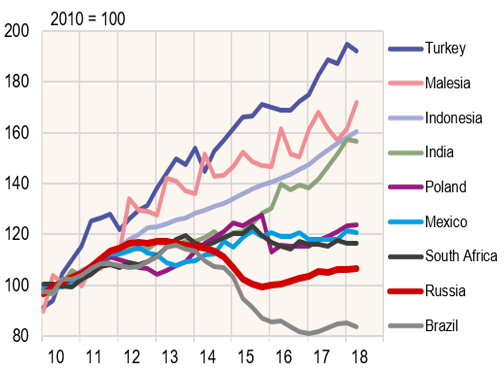