China customs reports a foreign trade surplus of 220 billion dollars for the first nine months of this year. The surplus has declined considerably since 2016, due largely to higher prices for commodities, particularly oil. When primary commodities are excluded from goods trade, China’s surplus have been relatively stable in recent years.

In September, the value of Chinese exports and imports rose by 14 % y-o-y. Exports to the United States were still robust in September, buoyed by the strong US economy and corporate preparations for escalation of the trade war. In contrast, Chinese imports from the US saw no on-year growth, causing China’s trade surplus with the US ballooning to record levels in September.

With no progress in US-China trade talks, the possibility of any quick resolution continues to recede. Both sides are exploring the possibility of a meeting between president Xi Jinping and Donald Trump on the sidelines at the G20 summit at the end of November. 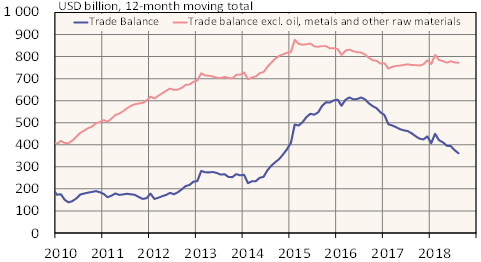