The IMF’s latest World Economic Outlook sees the global economy growing by 3.7 % this year and next. The growth estimates for both 2018 and 2019 were lowered by 0.2 percentage point from the previous forecast.

The IMF sees Russian growth remaining slightly below 2 % p.a. in coming years. Next two years' slight acceleration in growth was attributed to sharply higher oil prices and fiscal stimulus policies. Over the longer term, the IMF sees Russian growth slowing to around 1.2 %, and forecasts that economic growth of the region’s other major oil producer, Kazakhstan, will remain significantly higher than Russia’s for years to come.

Under the Central Bank of Russia’s basic forecast scenario, economic growth begins to accelerate in 2020 as the effects of structural reforms and targeted public spending begin to kick in. In the CBR’s basic scenario, the oil price falls to 55 dollars a barrel by 2020, when growth accelerates regardless of an oil price decline. The slight pick-up in growth is expected to continue in 2021.

The IMF sees China’s economic growth slowing next year. The September forecast of the Asian Development Bank (ADB) is quite similar in this respect for China. Both the IMF and ADB expect India’s growth to start accelerating this year. The country should be the fastest growing G20 country in the years ahead. 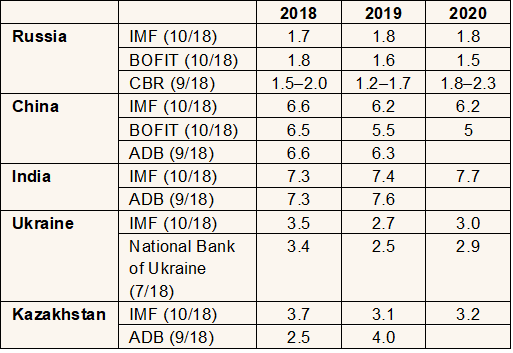