The outlook for China’s economy has become increasingly uncertain this year. As in our March 2018–2020 forecast, the baseline forecast in our latest BOFIT Forecast for China sees growth remaining strong, but slowing to around 5 % p.a. in 2020. The risk of lower growth, however, has increased.

An external driver of uncertainty has been the intensifying trade war with the United States already manifested in plunging share prices on Chinese stock exchanges and yuan depreciation. The main cause of China’s deteriorating situation, however, stems from its own problems, particularly the economic slowdown and rising indebtedness.

Over the longer term, China’s growth will be drawn down by demographic trends, environmental issues and the rise of a services-based economy. Unreliability of official figures makes clear assessment of current economic conditions difficult, but many indicators suggest growth is weakening. The slowdown in growth is also evidenced by the government’s robust stimulus policies designed to blunt the effects of the trade war and help the country meet official growth targets.

China’s current official GDP growth targets and accompanying stimulus policies stand in stark contrast to the country’s worsening indebtedness. Stimulus policies sustain old structures and unprofitable activities which, along with the lack of serious economic reforms, are an important source of the current trade policy battles. The credibility of reform policies has been further eroded by the heightened emphasis on the Communist Party of China’s importance and campaigns related to increasing the CPC’s power.

Market disturbances this year should be seen as a natural part of China’s economic evolution. We should also acknowledge the country’s significant buffers for handling problems. Nevertheless, the economic situation has been shifting in a disconcerting direction. The number of market disturbances could increase and China could see a much more abrupt slowdown than in our baseline scenario. 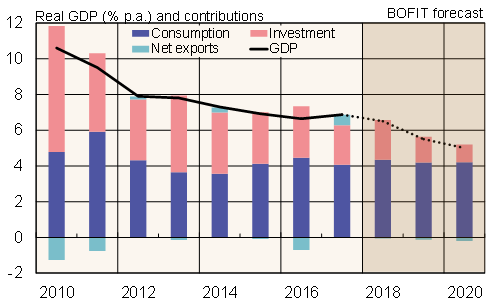