Our latest BOFIT forecast for Russia, which covers the 2018–2020 period, sees GDP growth this year remaining below 2 %, with growth slowing next year to around 1.5 % as long as the oil price (Brent crude) stays reasonably close to its current level of about $75 a barrel. Growth will remain slow in coming years as there is little indication that Russia will move ahead with market-friendly systemic reforms that are necessary to foster higher growth.

The recovery of Russian imports from a deep slump in 2014–2016 slowed this spring, dragged down by ruble depreciation (first-half import growth this year was 6 % y-o-y). Imports are expected to recover at roughly 5 % pace in the next few years as the ruble’s real effective exchange rate (REER) is assumed to remain rather stable. The rapid growth in Russian export volumes (mainly non-energy goods and services) is expected to slow, even if the relatively low REER supports export growth. The outlook for growth in Russian energy exports is tame.

The recovery in household consumption should remain rather slow. The increase in the value-added tax from 18 % to 20 % at the start of January 2019 will lift up consumer prices and bite purchasing power. Real pensions will rise slowly, and the state has not promised increases in government budget sector wages. Recently increases in corporate wages have been higher than productivity gains. The gradual increase in retirement ages starting next year means slightly fewer people than expected will be leaving their workplaces.

Fixed investment will continue to recover slowly, even with aging and worn existing capital and peak utilisation of industrial capacity. The state has started guiding investments made by state-owned and large private firms to the national programmes and projects listed in Putin’s inaugural decree on May 7 this year. While implementation of the projects is currently expected to get underway closer to next summer, it is unclear how much the guidance of corporate investment will increase corporate investment overall. Besides the state’s growing role in the economy, uncertainties in the business environment have increased due to new foreign sanctions and threats of further sanctions.

Government sector spending will increase in real terms this year, and will continue to rise next year to implement projects in Putin’s May Decree. Higher inflation will reduce real spending growth. The added spending will be funded by the VAT hike and by lowering the federal budget surplus. Even so, the federal budget, which assumes the Urals oil price at about $60 a barrel, and the entire consolidated budget are expected to show notable surpluses in the next few years. 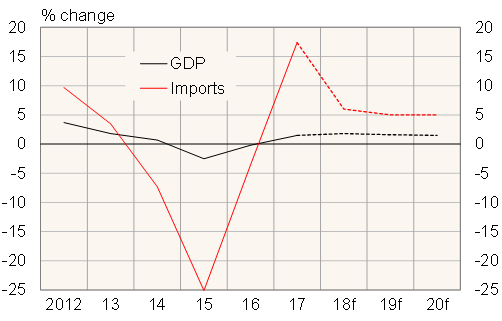