The August industrial output figures were boosted mainly by activity in extractive industries, where output increased by 4.5 % y-o-y. Information from Russia’s energy ministry shows a distinct increase in oil production in July and August, approaching the highest levels of output recorded in the post-Soviet era. Manufacturing industries have grown faster than extractive industries for most of this year. They grew slower only in August, when y-o-y growth dropped to 2.2 %. Notably, the August production of motor vehicles grew by 12.2 % and that of paper by 11.9 % from last year. In contrast, electronics production has declined over the past year.

Economic recovery is also visible in retail sales, which grew in real terms by 2.8 % y-o-y in August. The y-o-y growth of retail sales has fluctuated this year between two and three per cent. Volumes of retail sales and domestic consumption (as calculated in national accounts) have grown since early 2017. Growth in private consumption has been supported by growth in real wages. They were up by 7 % y-o-y in August. Although real disposable incomes dropped by 1 % y-o-y in August, growth has been positive in all other months of this year. Differences in growth in wages and disposable income indicate the significance of pension and capital income for households.

Increased borrowing is also driving higher household consumption. Households piled on debt in the years before the 2014‒2015 economic crisis. Much of that debt was used to buy consumer goods such as cars. The volume of new lending to households has been rising since the beginning of 2016, and growth this year has accelerated. Nominal y-o-y growth in ruble-denominated loans reached 37 % in July.

Trends in real wages and real disposable income in Russia 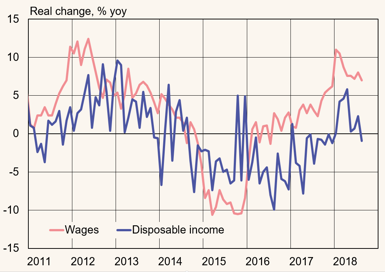