New figures released by the Bank for International Settlements (BIS) show that China’s total debt-to-GDP ratio rose by 5 percentage points in the first quarter of this year to 261 % of GDP. China’s debt ratio, is slightly higher than that of the US or the Euro Area, and significantly higher than that of other emerging market economies tracked by the BIS.

The monthly reporting of the People’s Bank of China of total domestic lending to the private sector suggests that the rising debt-to-GDP ratio continued in the second and third quarters. Although on-year growth in the stock of total lending slowed in August to 10 % (down from an average of 13 % last year), growth has still outstripped the pace of nominal GDP growth. The shadow banking sector is largely responsible for the slowdown in the rise in overall lending. Tighter regulation has reduced the stock of financing provided via the shadow banking sector in recent months. Growth in the stock of bank loans has continued at about the same pace as last year.

Most of China’s debt is domestically held. While foreign debt has grown rapidly for more than a year, it was still just 14 % of GDP at the end of June. About half of foreign debt is denominated in dollars and about a third in yuan.

Years of soaring debt have raised fears in many quarters. Debt explosions like China’s have, almost without exception, led to lower growth and crisis. Chinese authorities understand the problem and have managed to rein in it partly, but escalation of trade disputes has again shifted the emphasis of economic policy in a more stimulatory direction.

Debt-to-GDP ratios for China, Euro Area and the US (% of GDP) 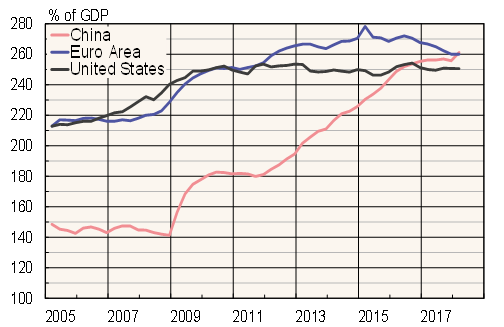