China's imports of crude oil rose by 8 % y-o-y in the first five months of this year. The period included several months of historical record highs in monthly oil import volumes. A total of 190 million metric tons of crude was imported in the January-May period, which translates to an average of about 9.3 million barrels a day. For January-May 2017, the average was 8.6 million barrels a day. China's domestic oil production continues to decline, so it has to import more oil and has become the world's largest oil importer. The volume of crude oil imported from abroad already exceeded the volume of China's domestic crude oil production in 2009.

Demand for imported crude oil certainly exists. Refineries increasingly depend on imported crude as China's domestic production has steadily declined since the second half of 2015. The causes of the production drop include ageing production facilities, high production costs and the depletion of some domestic oil deposits. In March 2018, China produced about 3.7 million barrels a day, the same amount as a decade earlier. Still three years ago, daily production exceeded 4.3 million barrels. Besides oil, the import volumes of other key commodities increased in the first five months of the year, particularly copper imports (up 17 %).

The overall value of Chinese goods imports in the first five months of the year amounted to nearly USD 860 billion, an increase of 21 % y-o-y. The value of goods exports was up 12 % to USD 960 billion. The trade surplus shrank in January-May by nearly a third from the same period a year earlier. Some of the change in export and import growth figures reflected the impact of exchange rate fluctuations. The yuan was on average 8 % stronger against the dollar in January-May compared to a year earlier. Measured in yuan, imports grew by 11 % and exports 3 %. China Customs estimates that the volume of imports increased by 7.5 % y-o-y in the first quarter of this year, while the volume of imports grew by 8.5 %. 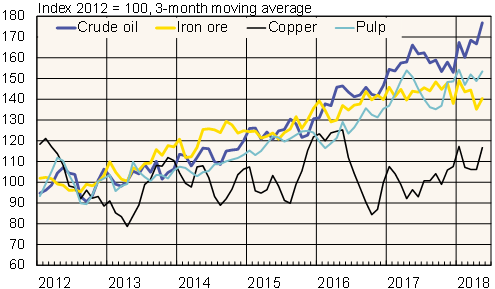