The net flow of inward foreign direct investment to Russia contracted slightly last year to $28 billion. In 2016, FDI numbers were boosted by the sale of a minority stake in Rosneft to foreign investors. FDI flows are still far below levels at the beginning of this decade. Over the past two years, however, new FDI has again begun to flow into Russia, whereas in 2014–15 recession most FDI consisted of reinvested profits.

Russia's total inward FDI stock stood at $535 billion (34 % of GDP) at the end of 2017. Nearly 70 % of that came from countries typically considered as pass-through countries or tax havens such as Cyprus and Bermuda. Much of these investments is considered to be of Russian origin.

Breaking down the inward FDI stock by sectors, the largest recipient (over 20 %) has been the extractive sector, which includes oil and gas. The shares of manufacturing, retail trade and financial sector have also been about 15-20 % each. In recent years, extractive industry has again risen as the largest FDI recipient sector, while retail and finance were the top sectors at the start of the decade.

The net outward flow of FDI from Russia last year amounted to $39 billion, or nearly double the amount in 2016. The stock of Russian FDI abroad at the end of 2017 was $470 billion. Over 70 % of that amount was invested in pass-through countries or tax havens and much of it has probably returned to Russia. 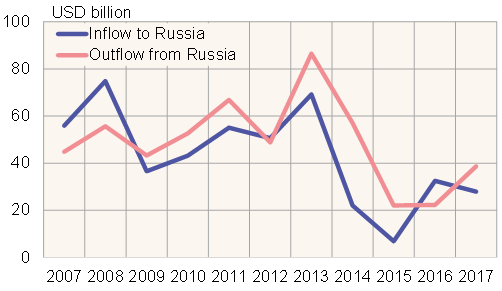