Russia's gold and foreign currency reserves have grown notably since early 2017. They stood at nearly $460 billion at the end of May. Some of the gains reflect forex purchases by the Central Bank of Russia on behalf of the finance ministry, while other gains came mainly from the rise in value of certain reserve assets. The forex purchases have added about $30 billion to the reserves since they began in February 2017.

The structure of Russia's reserves has also evolved gradually over time. Gold's share has more than tripled in this decade as the CBR has built up its gold reserves. Gold accounted for nearly 18 % of the value of reserves at end-May.

The share of assets denominated in Chinese yuan has also grown significantly, standing at nearly 3 % of total reserves at the end of 2017. Nevertheless, most of Russia's currency reserves is still held in dollar- or euro-denominated assets.

Russia's foreign currency reserves also include the liquid forex assets of Russia's oil fund, which currently are worth about $40 billion. Their share in currency reserves has diminished notably in recent years as fund assets have been used to finance budget spending. The currency reserves have not diminished, however, because the finance ministry has sold the forex-denominated assets to the CBR in exchange for rubles.

Russia's currency reserves provide a quite strong buffer in the event of an external financial shock. At the moment, the reserves are sufficient to cover e.g. about 17 months of imports or 140 % of Russia's short-term foreign debt. 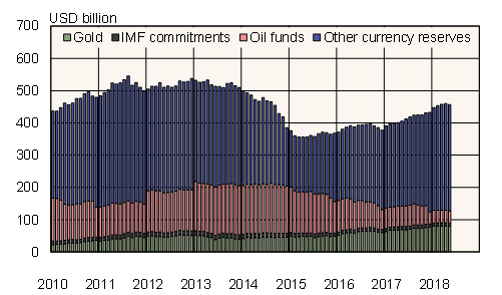 Sources: CBR and Ministry of Finance.