Monthly indicators released by the National Statistics Bureau show that the nominal increase in fixed asset investment (FAI) in May was below 4 %. Even with modest price assumptions, real growth in FAI was negative due to the contraction in public investment. In the first five months of 2017, public investment still rose faster than private investment.

The slowdown in growth of fixed investment is a long-term trend as Chinese economic growth becomes increasingly dependent on consumption demand. Growth in retail sales, a rough measure of consumption, fell to below 7 % y-o-y in May in real terms. Industrial output grew by nearly 7 % y-o-y. 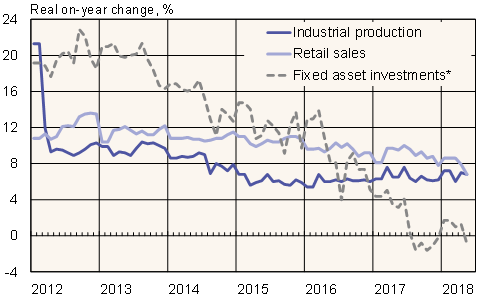 * Investment trend for April-May 2018 based on estimated prices.