The value of China's first-quarter goods exports amounted to $545 billion, an increase of 14 % y-o-y. The value of imports was up by 19 % to nearly $500 billion. This year the overall trade surplus contracted to $49 billion. While the overall trade surplus contracted, China's surplus with the United States rose by 18 % y-o-y in January-March to $58 billion. China's $14 billion surplus with rest of the world (except the US) in 1Q2017 turned to a $9 billion trade deficit in 1Q2018.

China's growing trade surplus with the US only exacerbates tensions between the two countries. On April 13, the US treasury department released its semi-annual trade report. The treasury department expressed serious concerns about the US trade deficit with China and China's unfair trade practices, but refrained from calling China a currency manipulator. China, in fact, has recently supported the yuan's value. On Monday (Apr. 16), the US commerce department imposed a seven-year ban on component sales of US firms to the Chinese telecom giant ZTE. Officially, the ban was declared because of ZTE's business dealings with Iran and North-Korea. US-based Qualcomm, however, could lose one of its most important customers as its microchips are found in nearly half of all the phones ZTE produces. On Tuesday (Apr. 17), China, for its part, imposed a temporary 179 % antidumping fee (in the form of obligatory deposit) on US sorghum. China imported about $1 billion worth of US sorghum last year. 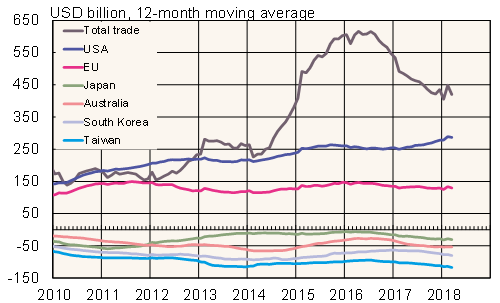