On April 6, the United States added 24 Russian businessmen and public officials, along with 15 Russian companies, to its sanctions list. Half of the blacklisted firms (including Rusal, one of the world's largest aluminium producers) are owned by Russian oligarch Oleg Deripaska, who now finds himself also on the list. Entities subject to the sanctions face freezing of their assets in the US and Americans are now generally prohibited from dealings with them. Non-US persons could also face sanctions if they knowingly facilitate significant transactions of listed entities.

The initial market reactions in Russia were strong with the Moscow exchange's RTS index falling 12 % in the beginning of the week and the ruble losing about 10 % of its value against both the dollar and the euro, but yesterday there was a visible correction upwards. The biggest losers have been listed firms hit directly by sanctions, but also many other Russian firms, e.g. metal producers and banks, saw their stock prices tumble. In addition to last week's new round of sanctions, markets were spooked by a proposed US bill to sanction Russian sovereign debt and heightened tensions between Russia and the US in the Syrian conflict. Market jitters should continue in the coming days, but calm gradually if further complications do not arise. 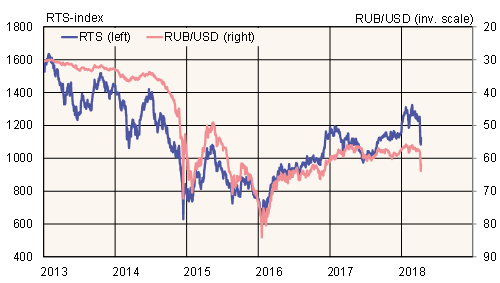