China's National Bureau of Statistics reports that first-quarter GDP grew at 6.8 % y-o-y – exactly the same pace as in the previous two quarters. Official figures paint a picture of remarkable consistency in Chinese economic growth over recent years which is hardly a credible description of a transition economy that experiences major changes.

Despite the challenges of interpreting Chinese GDP figures, economic growth apparently has remained robust thanks to strong domestic consumer demand. However, many of the monthly indicators of economic performance (e.g. industrial output, fixed asset investment, electricity generation) suggest economic growth is slowing. In addition to the structural deceleration of growth, heightened US-China trade tensions and the severity of the debt problem pose extra risks to the future growth prospects. 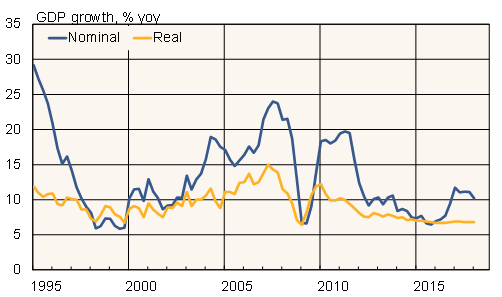